The demos here have been drawn in the course of a student's homework critique, but contain information that can be useful to all working through this material.

This is a pretty detailed demonstration I did for a student who was struggling with the lesson, picking on a donkey in particular. It focuses on all major elements of construction as applied to animals - the basic masses, the use of sausage forms for limbs and torso, the adding of further organic masses that conform to the structure underneath them, etc. 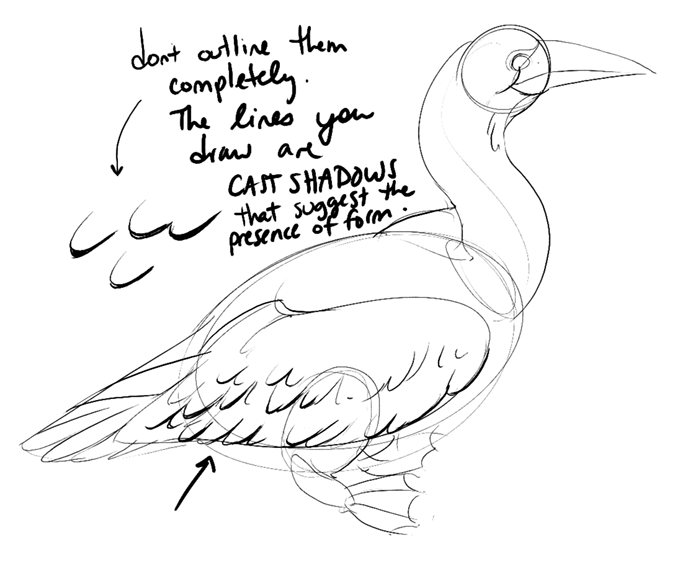 As we've discussed back in lesson 2 when talking about texture and detail, cast shadows are king. This is just a basic example of how you can convey simple feathers by capturing a few of the shadows that they cast on each other. 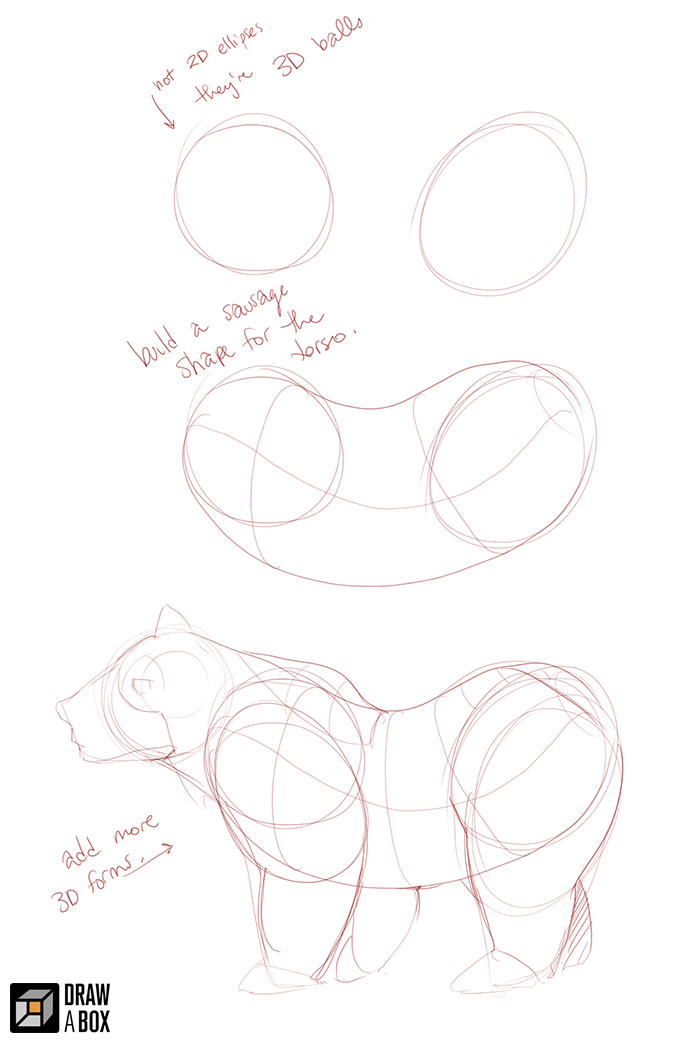 The torso-sausage is the core of any animal, and quite easy to construct. In this demo I actually drew the ribcage way too small, but ignoring that, look at how the sausage is like a water balloon that is being held up by these two solid masses inside of it. The middle sags in the middle, and it remains relatively rounded and simple, conveying solidity and volume.

While a lot of animals will have visible masses and bulk along their spines (on the top), I still construct them in this manner, only adding the additional bulk after the fact similarly to the organic intersections from lesson 2. 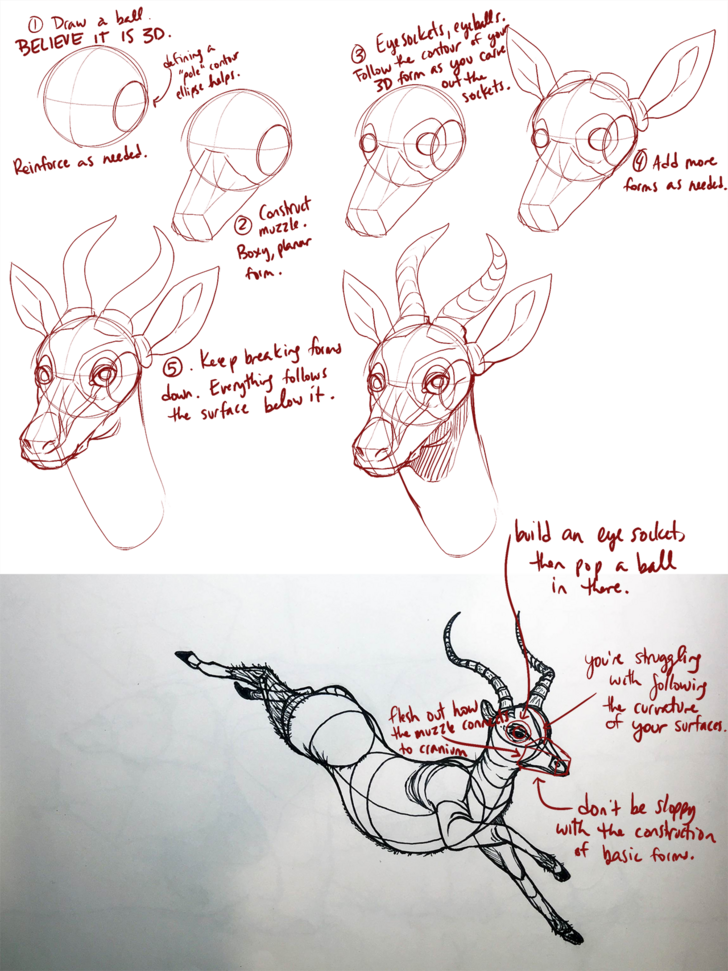 An analysis of how I would gradually build up the construction of this gazelle's head. 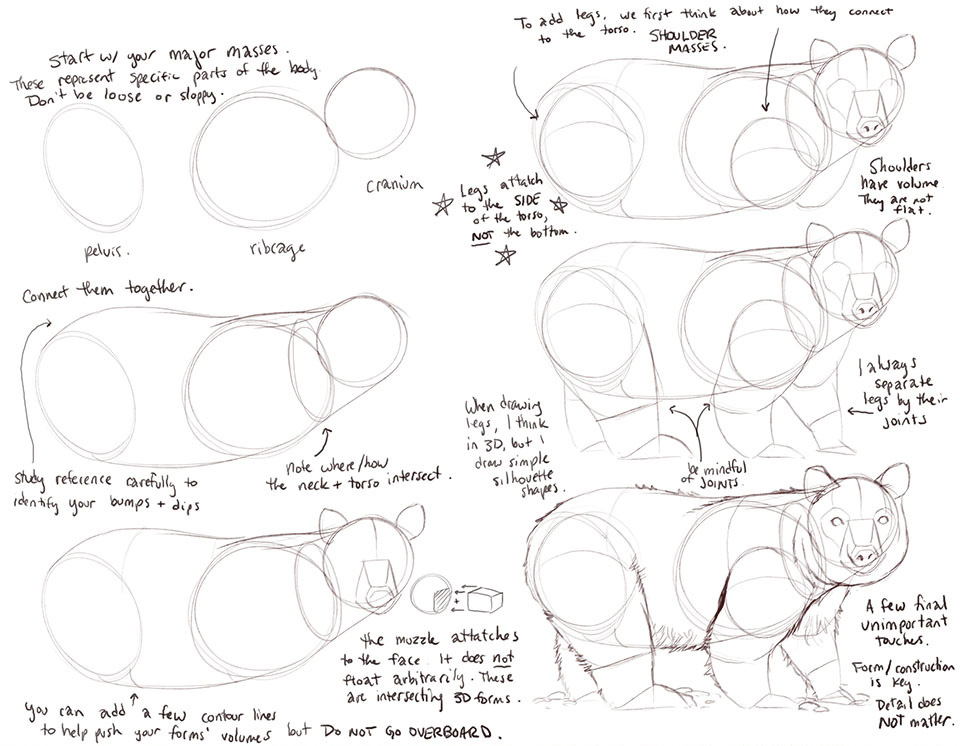 This one's pretty old, but it still shows the principles of construction fairly well. Note that I haven't used the sausage method for the legs, but I'm still applying a lot of the same concepts.

This one's very old, but I feel like the way it accentuates the volumes and general gestural nature of the legs still makes it valuable in some ways. There is a lot to be learned here, just don't let it cause you to stray from the techniques covered in the main lesson and demos. 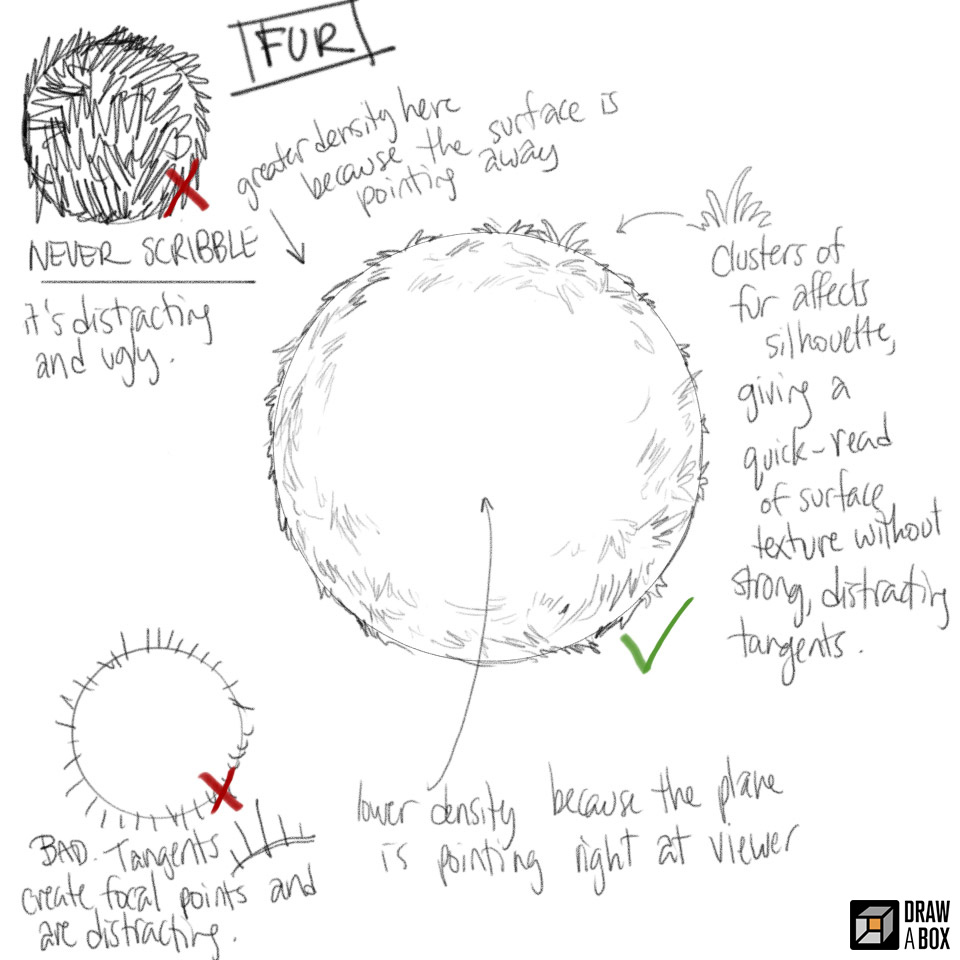 When tackling fur, make sure that you're not going into auto-pilot, trying to cover your silhouette in zigzags. Add specific, intentional, designed tufts of fur along the silhouette. This is what is going to carry the majority of the illusion of fur - you don't even have to put that much. 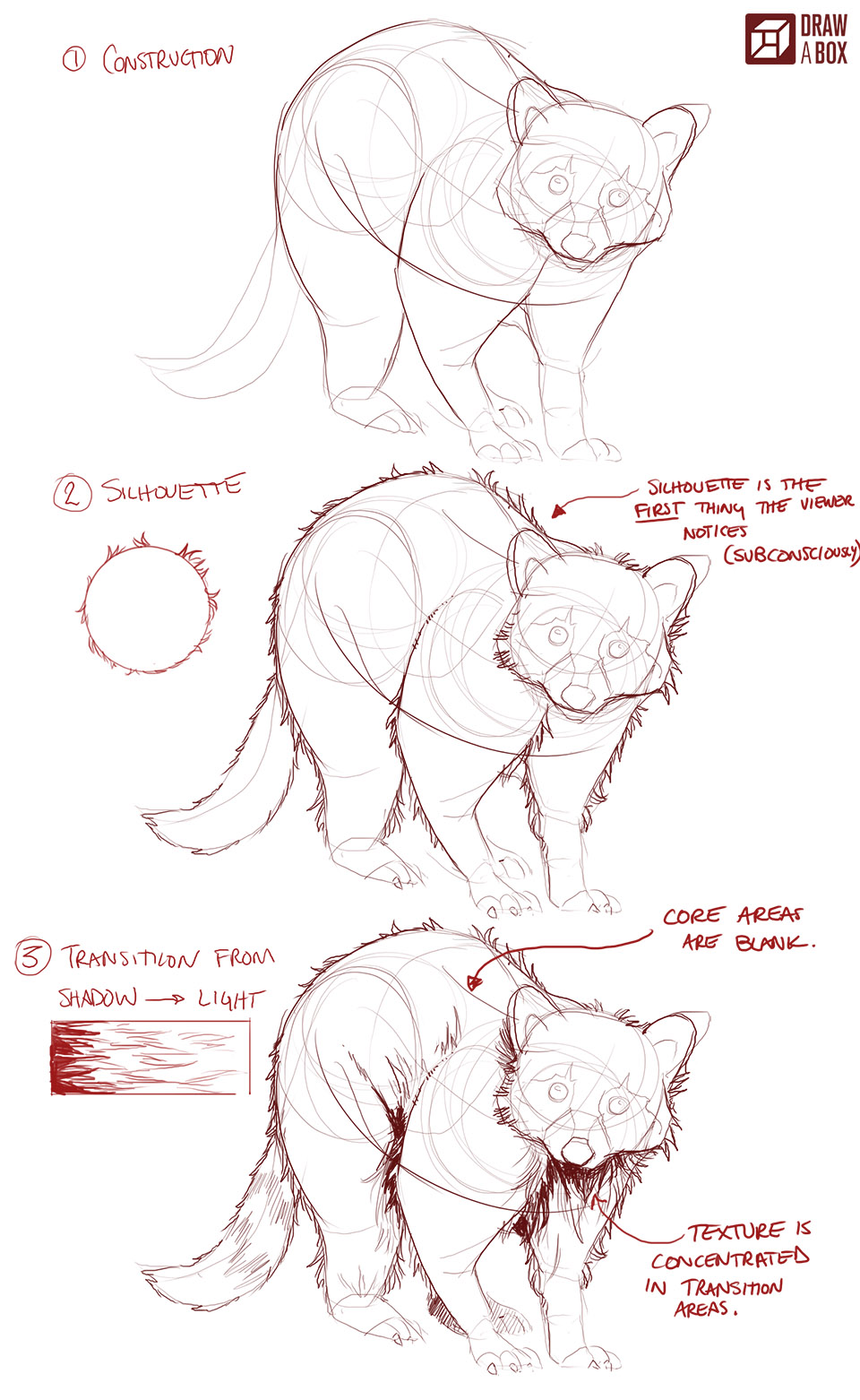 Applying fur to a raccoon

Taking the concepts described in the demo above, here I'm applying it to a construction of a raccoon. 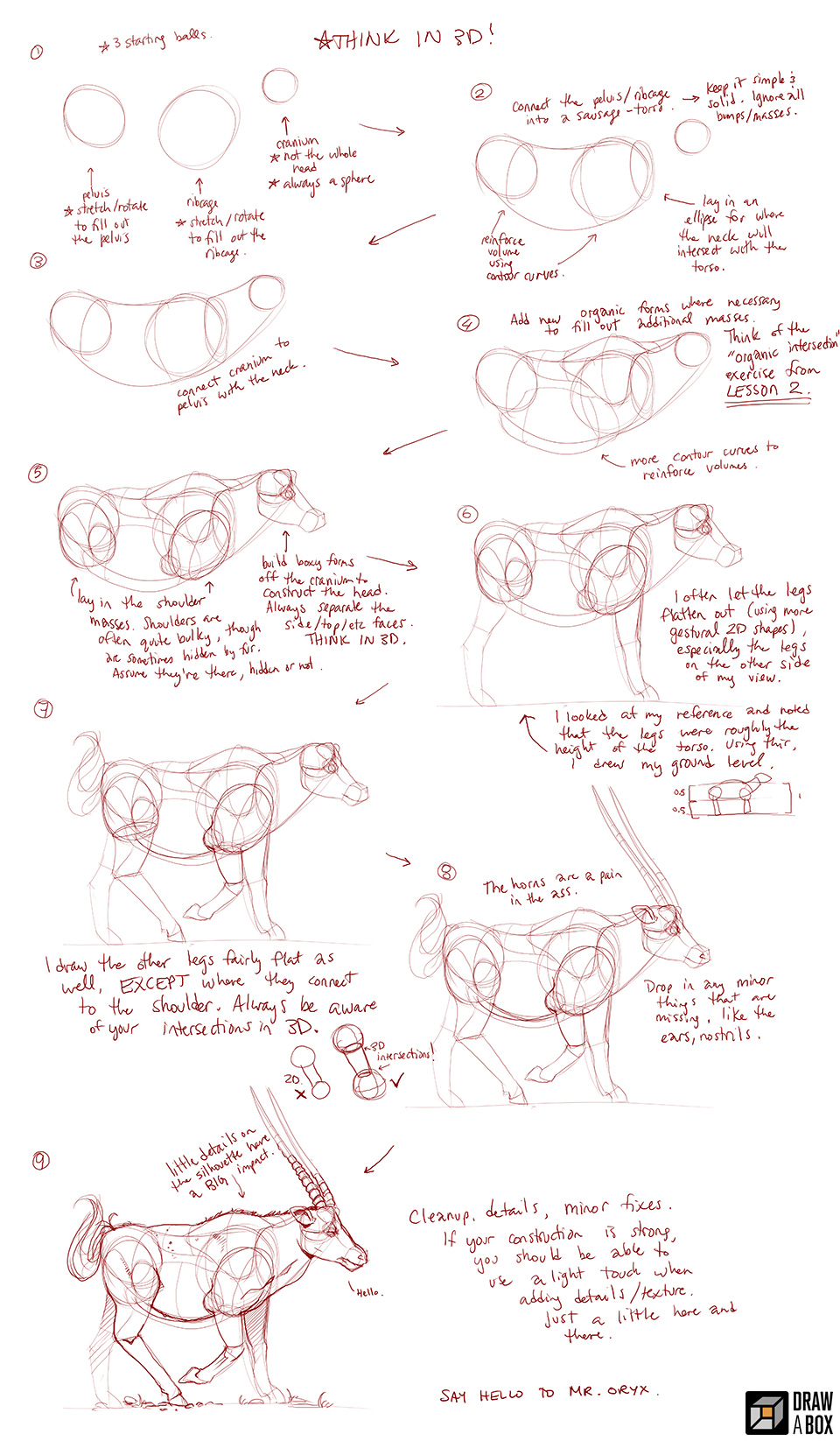 Constructional principles applied to an oryx. Notice how I'm building up the bulk of its back with additional forms, not trying to achieve this all with the torso-sausage. 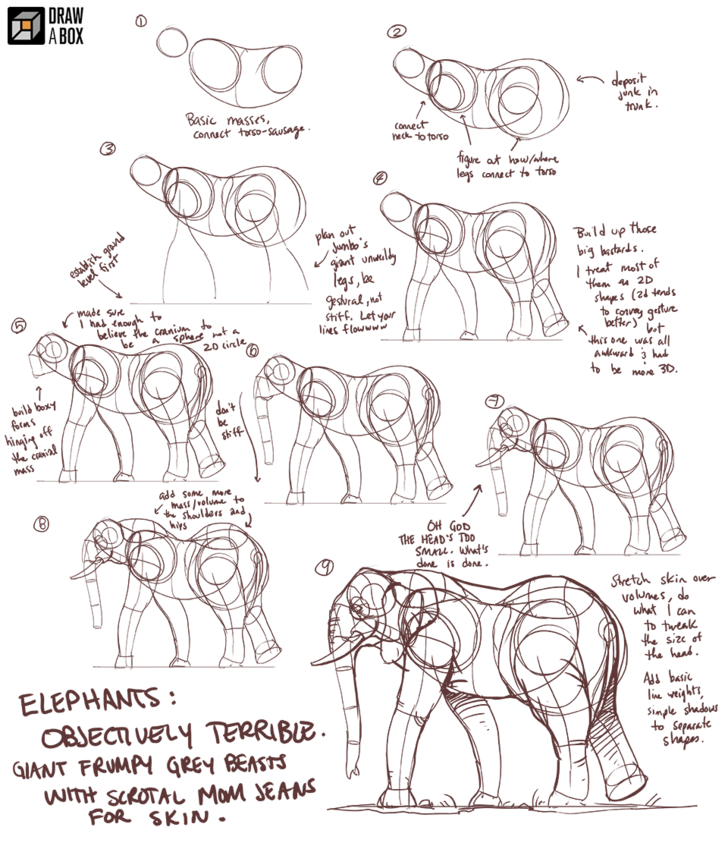 A construction of an elephant. Again, I'm not adhering to the sausage technique for the legs here, though they're still reflecting a lot of the gestural qualities that the technique espouses. Remember that these techniques you're learning are intended to teach you the concepts that lay beneath them. Once you get the hang of them - which can take some time and practice - you can then apply them as much or as little as you want.

Just be sure to stick to them when working through these lessons so I can be sure that you're getting a good deal of experience with them.