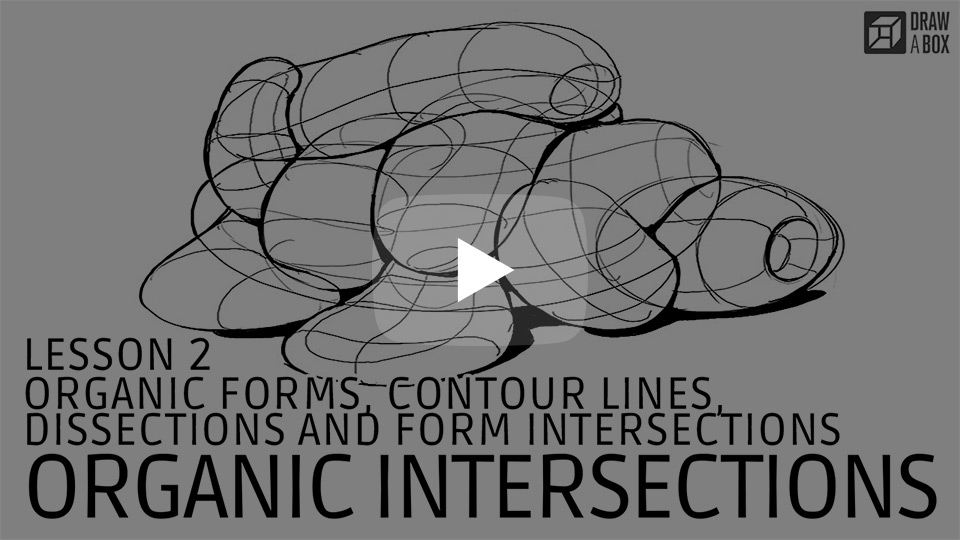 This exercise is less about getting organic forms to actually cut into one another, and more about how they can be piled on top of one another in a way that feels convincing. It requires a grasp of the weight of these sausage forms, and how they might slump and sag where that weight is not supported.

Keep your forms simple, and try to picture them as being a bunch of water balloons that you're trying to set in a pile. 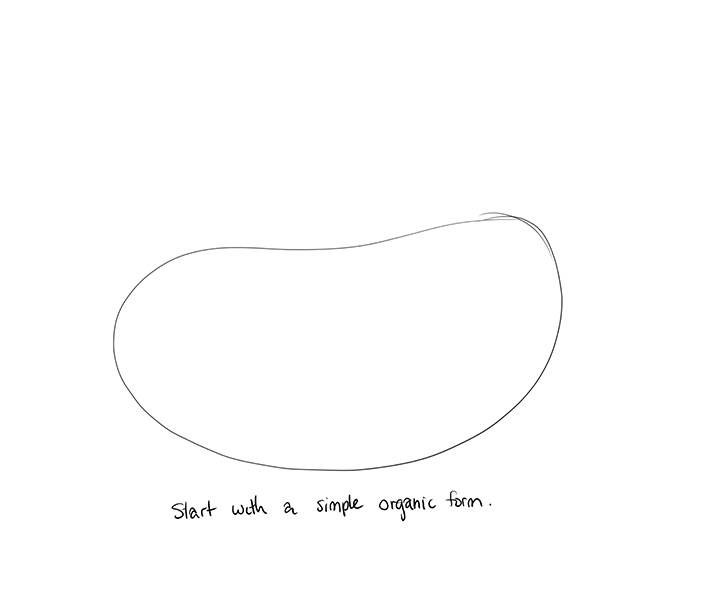 To start with, draw a simple organic form. Since we're going to be dealing with a lot of them, the complexity of each individual form is not particularly important. It's generally best to stick to something simple, like a sausage form. 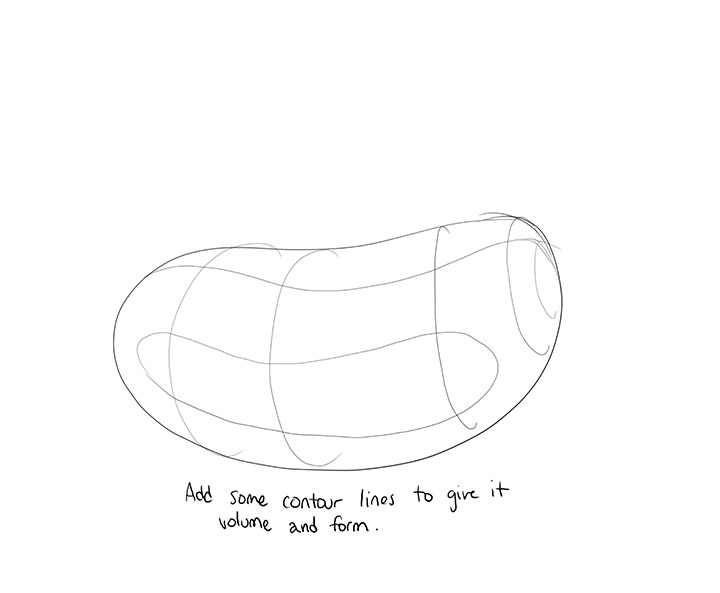 Next, just like in our organic forms with contour curves, and even in our dissections, we add contour lines to give the flat shape a sense of volume and form.

Note: You may notice that these contour lines are a little different from what we used in the previous contour line exercise - but in fact, they're essentially the same. Contour lines run along the surface of a given form, and in doing so, they describe how that form turns in space. In the previous exercise, we focused on contour lines that run perpendicular to the flow of our sausage form, but we can run them in whatever direction we like - though some are more effective than others.

As you complete this step, think about what it is you're doing - you're not just drawing lines on a page. You're imbuing a flat shape with volume, with weight, with solid form. It's no longer just a 2D shape, but a 3D object that can be lifted, moved, thrown and dropped. If you pick it up from one end, it will dangle. If you hold it from its middle, it will sag on both sides.

Don't move ahead until you can feel it in your mind, that this form has real weight to it. 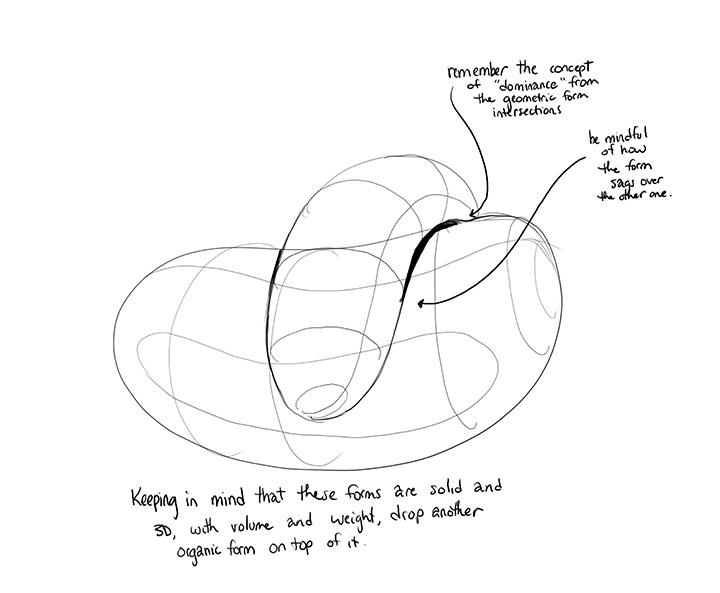 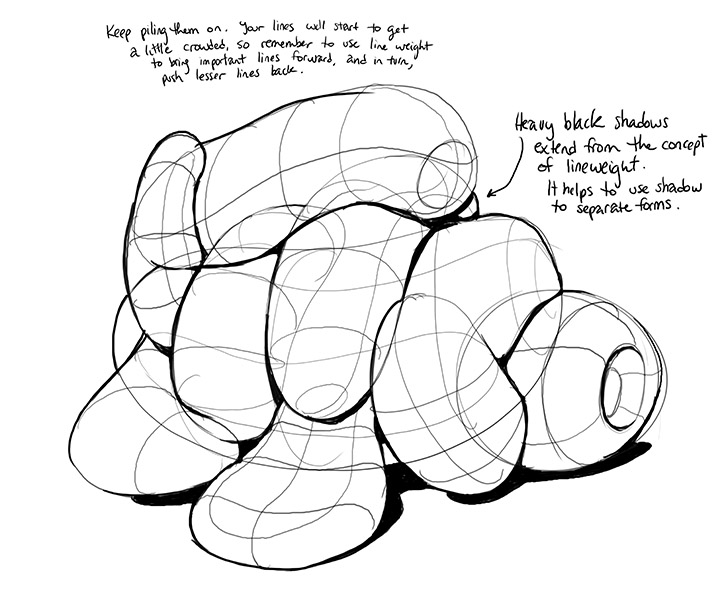 All there is to do afterwards is repeat the process. You can drop more organic forms on top, or you can play with wrapping them around each other, or jamming them into one another. It's completely up to you.

The important thing is what I've stressed thus far - you're not pasting flat shapes on top of each other, you're dealing with solid forms that cannot occupy the same space. So, in order to wedge them against one another, one has to displace the other.

Much of what we tackled in the form intersections is at play here as well - the only difference is that our forms are more malleable and flexible. When two of these forms intersect, they displace each other as I mentioned, but you still experience a dominance of one form over another, and that dominance is still handed off between them at different points in space.

This kind of exercise can be quite calming, once you get the rhythm and the sense of form and mass. Once that clicks, it's just a matter of dropping form after form after form. In the long run, you will also find this exercise to come up when you start dealing with topics such as drawing insects, or drawing animals, where we often need to add additional masses in a way that doesn't just feel like we're pasting stickers on top of our construction. Every form we add needs to somehow relate solidly and consistently to that which is already there in order for the whole thing to maintain its believability and sense of solidity. 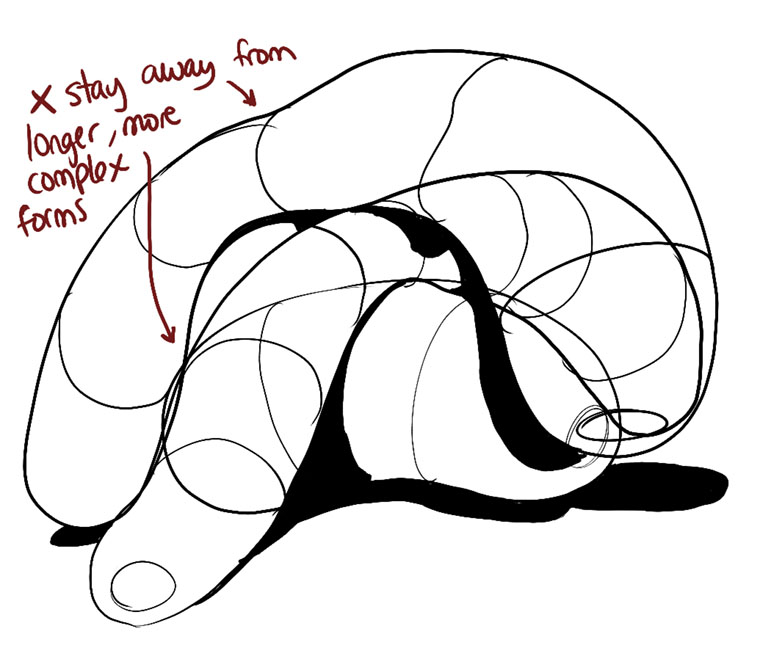 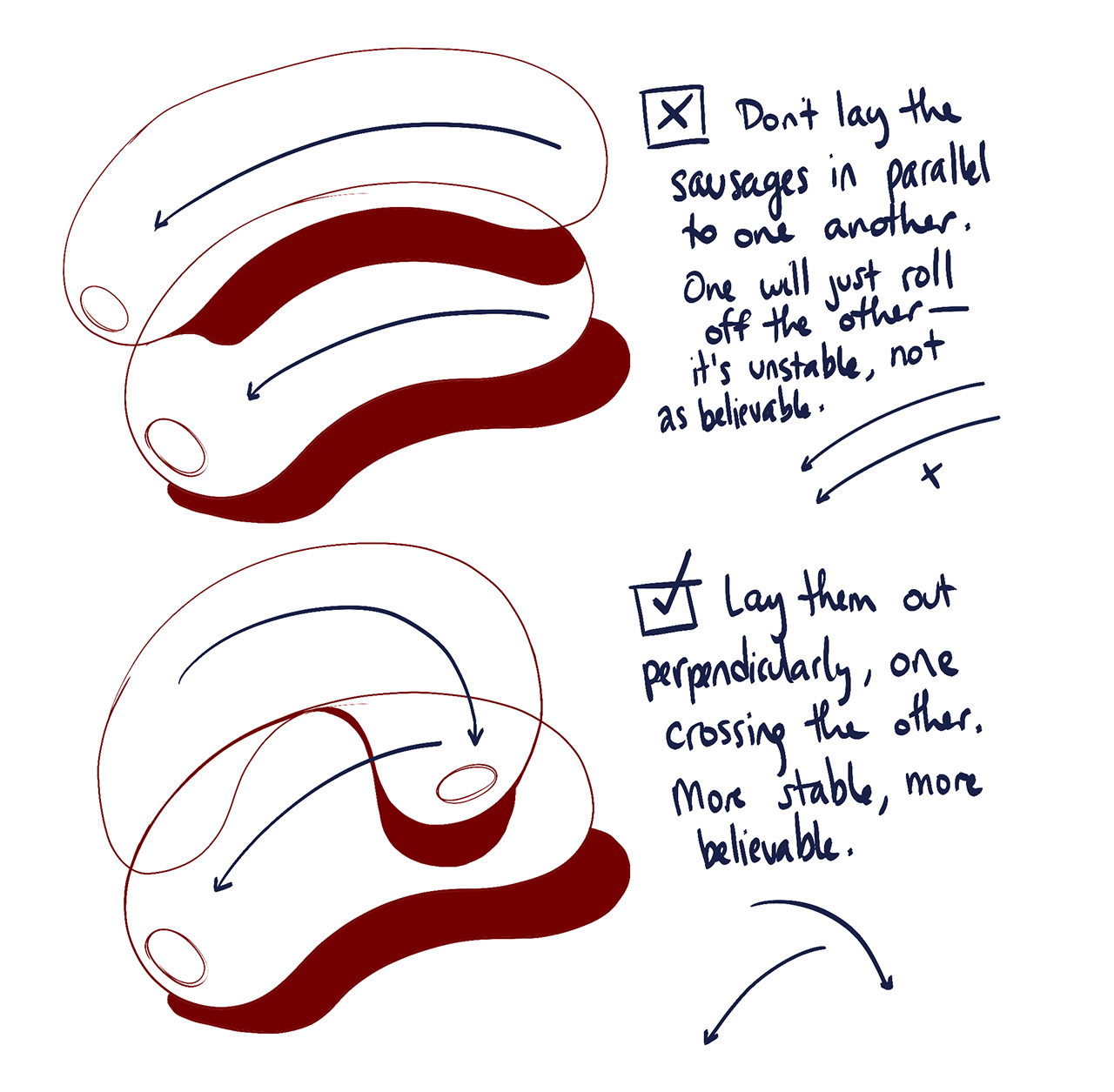 When doing this exercise, it helps a great deal to lay the sausages out cross-wise - that is, in opposite orientations, so they lay perpendicular to one another, instead of parallel.

Part of what contributes to the believability of an arrangement of forms is the sense of stability that is presented. If the sausages run parallel to one another, we can assume that in the next instant, the top one will roll away, giving the impression that we've been caught in a frozen moment of time.

While putting the viewer in a "frozen" state isn't inherently wrong or bad, it does serve to undermine the viewer's suspension of disbelief a little bit, and erodes the illusion that what they're looking at is 3D - so it's something we would consciously choose to do with intent in an actual illustration, rather than something that just happened to occur due to us drawing without consideration.

Conversely, when the sausages are laid across one another, perpendicularly, we're given a much stronger sense of stability, coming from the sense that if we were to stare at this pile for a period of time, it likely wouldn't change.

On top of all of that, the point of this exercise is to consider the way in which each form wraps around the ones beneath it - laying them out like this allows us to focus on how they wrap around one another far better as well. 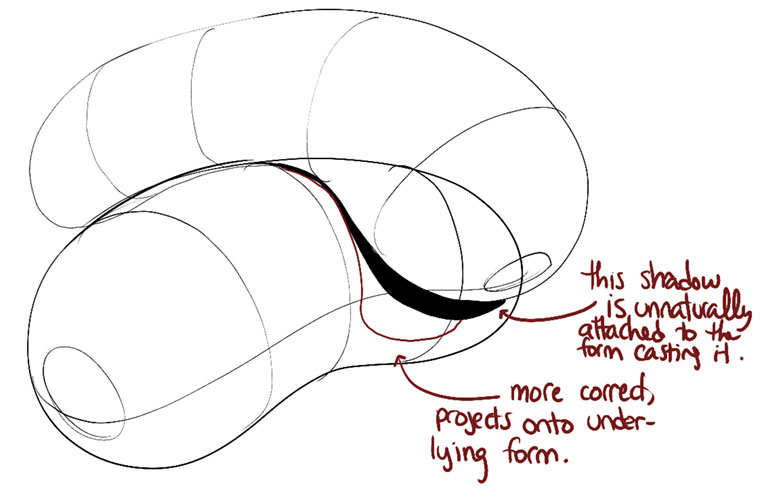 When dealing with the shadows cast by our forms, we need to remember that these shadows are being cast and projected onto the surfaces that exist beneath the form - whether that surface is directly underneath or miles away, whether it's flat and simple or curving in some awkward manner. The shadow itself warps itself to the surface it falls upon. A frequent mistake is to have the shadow adhere too closely to the form casting it, resulting in some illusion-breaking shadow play.

Since one page should contain only one 'pile' of forms, this is the same as the last step shown above. 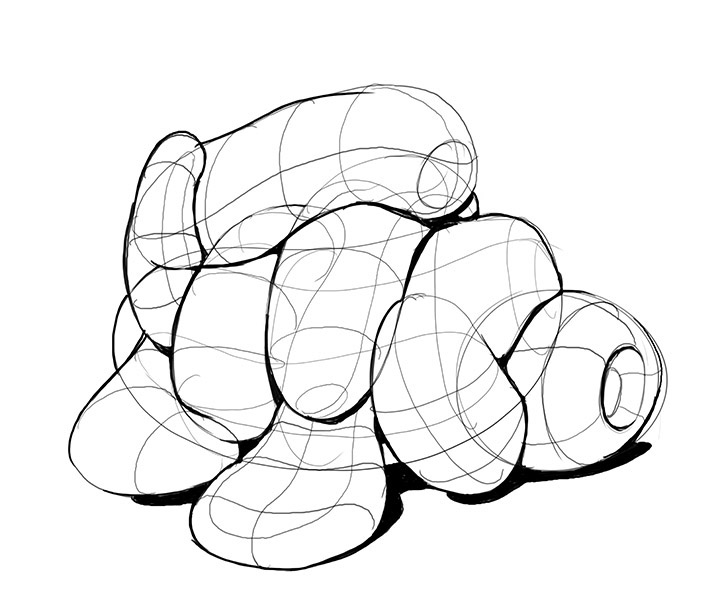