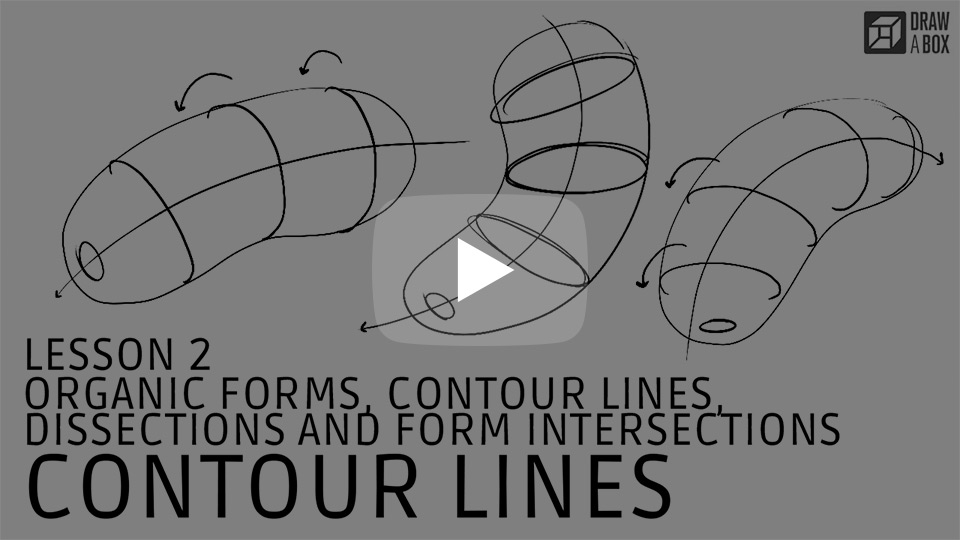 Here we're going to tackle contour lines, a technique that you will carry with you for a long time to come both as a constructional technique to help you better understand how the forms you draw sit in 3D space, and how their surfaces curve and distort, as well as a technique to help convey those concepts to your audience in your final designs and illustrations. 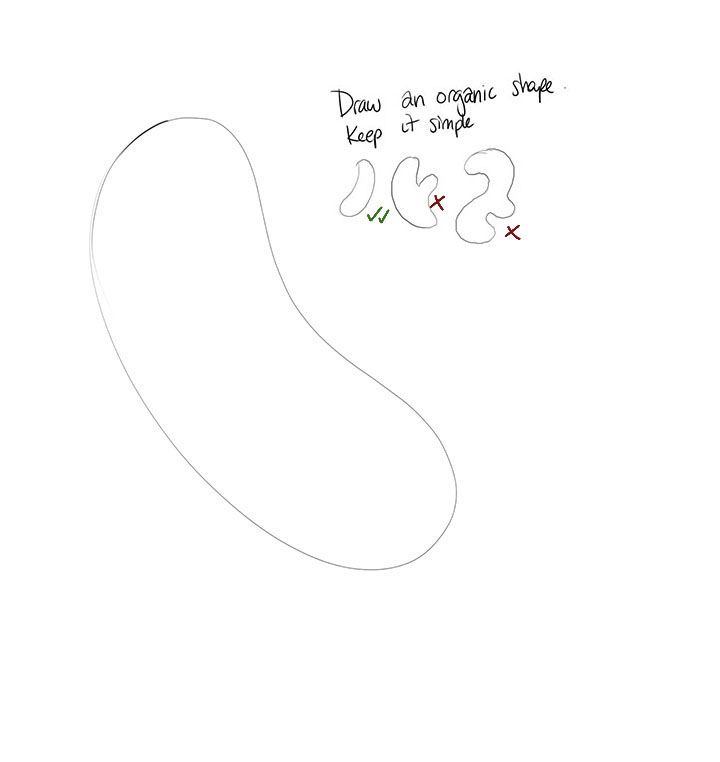 So we're going to start out with a simple sausage form. It's basically like two balls connected by a tube of consistent width. Don't make this form more complex than this - I don't want to see any branching, or any tapering/swelling through its midsection. Making it more complicated is only going to draw your attention away from the focus of the exercise.

On top of that, sausage forms are extremely useful, especially later in the animals lesson. 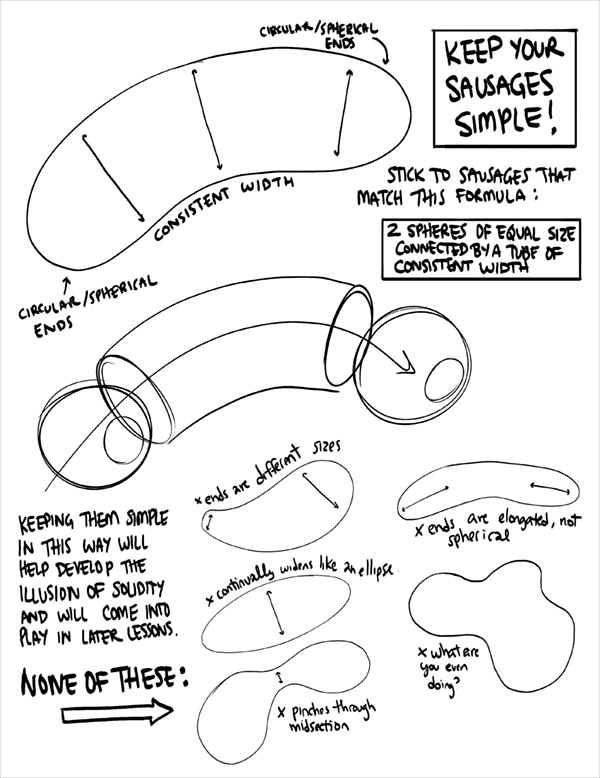 Students have regularly missed what I stated in the previous stage, so let's go through this again:

KEEP YOUR SAUSAGES SIMPLE. The formula you want to match is two equally sized spheres connected by a tube of consistent width. Avoid:

This will come into play in future lessons, especially as we use these as one of the basic forms of organic construction. 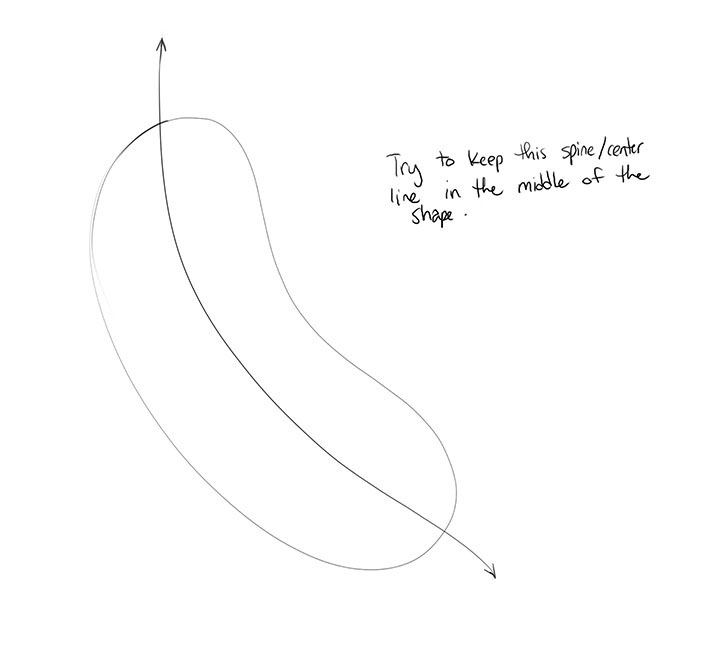 Draw a line through the center of this form. Try your best to keep it centered, but even if you miss it, that's okay. This line will represent the minor axis of the contour ellipses we're going to add next, though you can think of it like this form's spine. 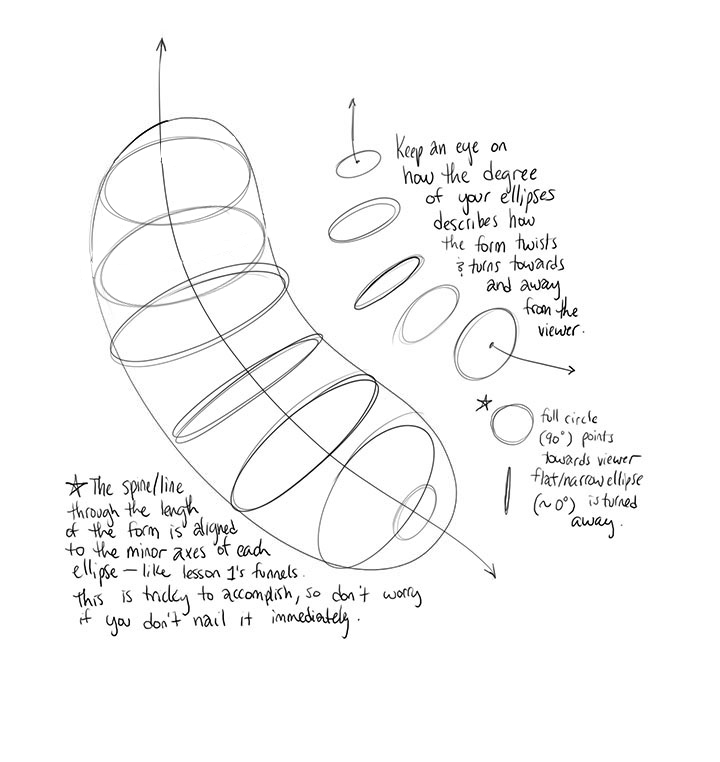 Place a series of ellipses along this spine, aligning their minor axes to it. If the spine is not entirely centered, you'll have to try and align them to where the spine would have been. Having a line there to begin with actually helps with this, but don't adhere to it too closely if it's not actually centered.

When drawing your ellipses, be mindful of each one's degree. If you remember from lesson 1, this is the width of an ellipse. As you pick a different position along the length of that sausage form, the orientation of that cross-sectional slice is going to be a little bit different relative to your viewing angle, resulting in a slightly different degree.

In the homework assignment for the first part of lesson 2, I ask for two pages of organic forms, one with contour ellipses. That's what this depicts. For the contour curves, look to the next section instead. 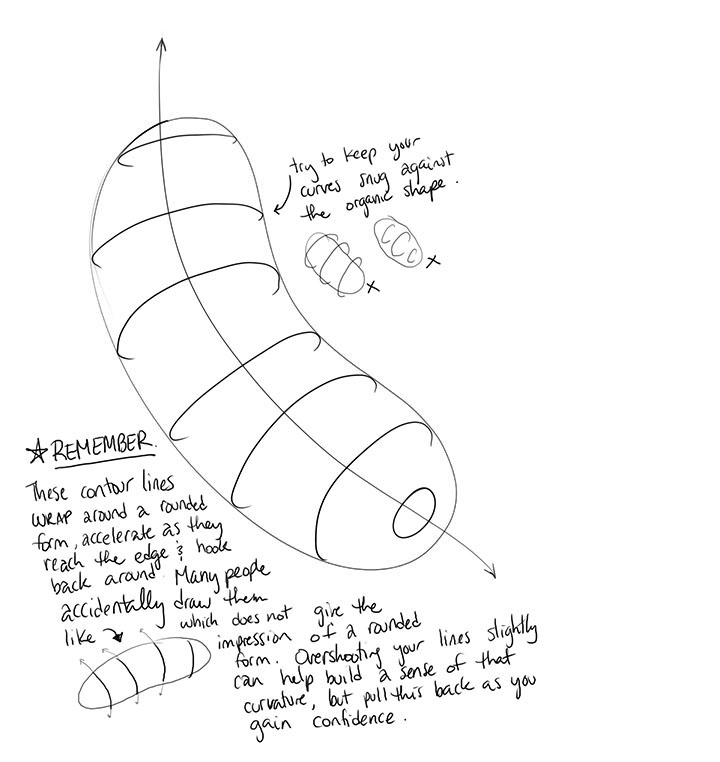 For the other page of the homework assignment, instead of drawing full ellipses, I want you to draw only the section of the ellipse that will be visible. This is going to be a curving line whose curvature accelerates as it reaches the edge just before it hooks around and continues along the other side.

You can see in this image that I overshoot my curves slightly as they hook around, so we can see a little bit of how it'd continue along the other side. I'd like you to do the same, as this is going to get you accustomed to how to achieve that kind of curvature.

If you look at the very end (towards the bottom right) of the sausage in this image, you'll see a little contour ellipse there. We can see the entirety of this ellipse because it's facing towards us - this also happens to serve as a very effective visual cue.

Contour lines themselves are something we're going to use a great deal throughout our later lessons, as it'll help us to better understand how these forms that we're drawing exist in 3D space, and how they relate to one another. They'll also help us to reinforce the illusion that they're solid and three dimensional.

One important thing to keep in mind however is that you don't want to get in the habit of simply dropping a bunch of contour lines on something for no reason. In this exercise it's not really an issue because we're simply practicing their use. When using them in actual drawings, I frequently see students draw far too many without any real consideration of what each individual one is meant to accomplish. So before you draw a contour line as part of a construction - or really, before you draw any line - think about what it is meant to accomplish as part of your drawing. If it isn't going to be contributing much, or if that task can be done better with a different mark (or is already being accomplished by another), don't draw it. Otherwise, draw it using the ghosting method - plan it out, take your time, and execute it with confidence. 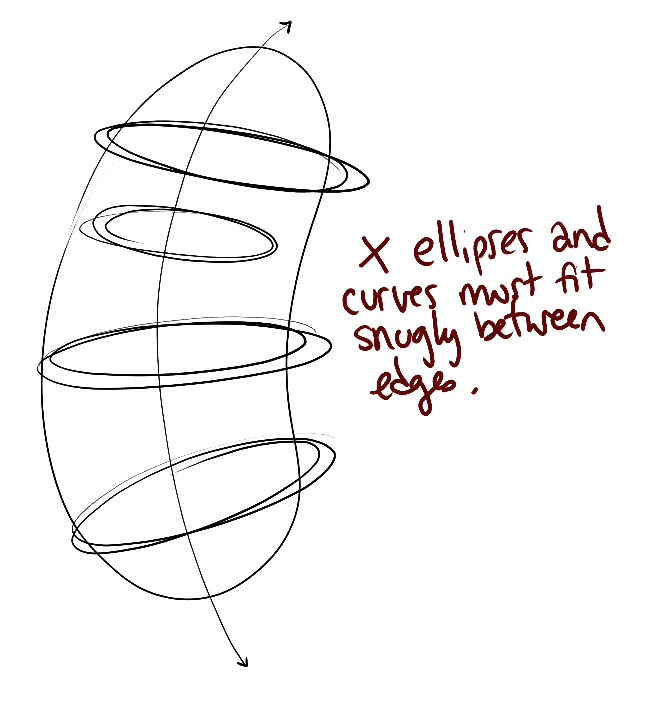 As the contour line illusion is based around the idea that these lines run along the surface of a given form, it's pretty important that you strive to keep these contour ellipses and curves snugly pinched between the edges of the organic form. This won't always be easy, but there's definitely a visible difference between someone making an attempt to achieve that, and someone for whom it is not a significant priority. Be the former. 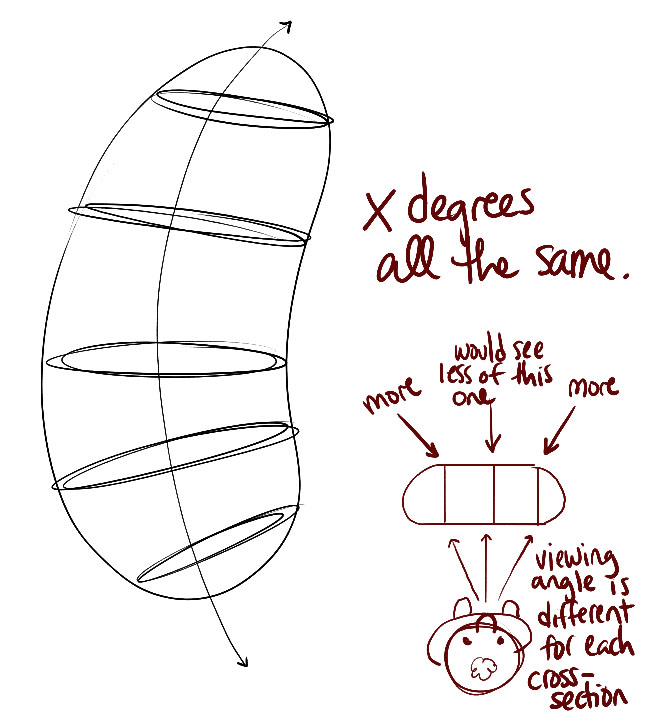 Mistake: Degrees all the same

As mentioned in the instructions for the exercise, give your ellipses a bit of a shift in their degree as you run through the length of the form.

The reason for this is explained in the little exaggerated red doodle. When you have an object held in front of you and you take three parallel slices of it, your viewing angle for each slice is going to be different. If it's dead center in front of you, you're not going to be able to see any of its face, just its edge. If it's off to the side, you'll see a little more of it.

Now because the size of sausage form is actually quite small, the shift isn't going to be that significant (unless the form itself is bending, which it may well be). All the same, you're not going to end up in a situation where the degrees are all the same.

... At least not unless it's bending backwards in just the perfect amount but we're not going to get into that. 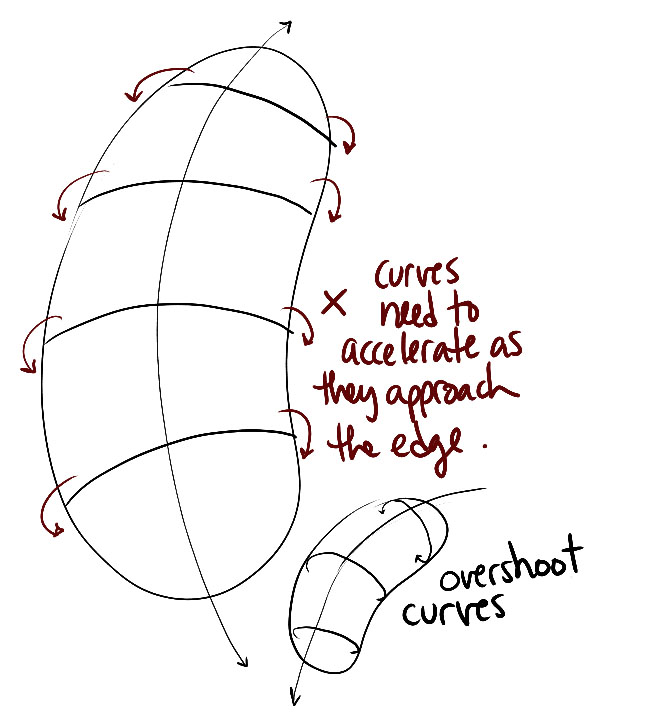 In the instructions for the lesson, I mention that when drawing contour curves, you should try to overshoot them just a little bit. That doesn't mean have them fall outside of the form, but rather that you should let them continue along onto "the other side of the form".

A lot of students find that when they don't do this, even if their contour ellipses are great, they run into this problem where their contour curves end up being too shallow. Learning to accelerate the curvature of the line as it reaches the edge is important, and the overshooting method definitely helps. 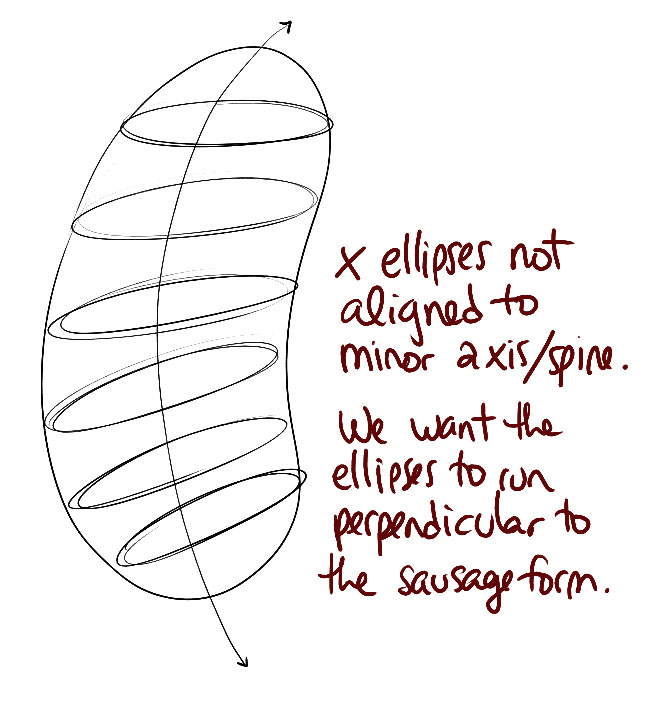 Each ellipse should be aligned to your spine line as its minor axis - or in the case that it wasn't centered properly, where that spine line ought to have been. You want it to cut each ellipse into two equal, symmetrical halves down its narrower dimension, just like we did in lesson 1's funnel exercise. 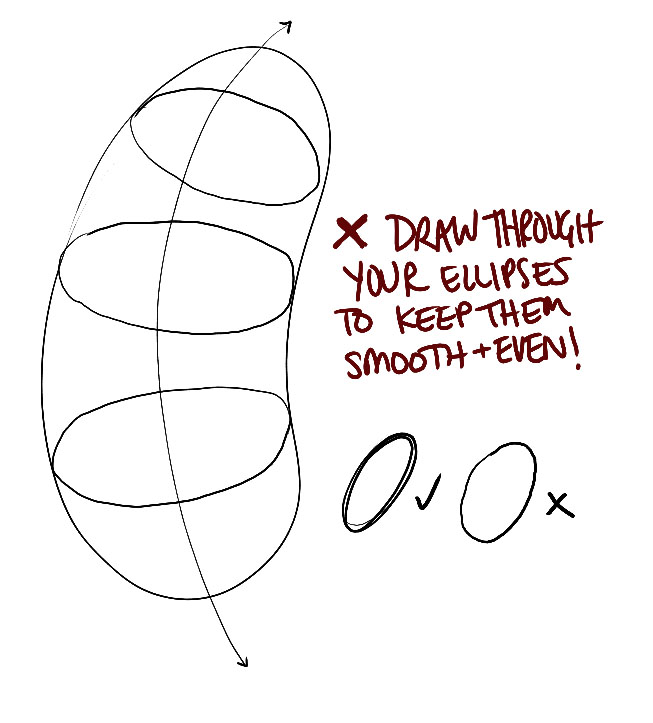 Mistake: Not drawing through ellipses

As mentioned in lesson 1, every ellipse you draw for these lessons should apply this technique of drawing through the shape two full times before lifting your pen. This is meant to help you maintain a certain degree of confidence so as to keep things smooth and even.

And when you're done, your pages should look something like this (one page of contour ellipses, one page of contour curves). Note that while the sausage forms shown below aren't always adhering perfectly to the characteristics of simple sausages, those characteristics are what you should be aiming for. Just don't worry if you don't nail them each time, as it can be quite difficult. 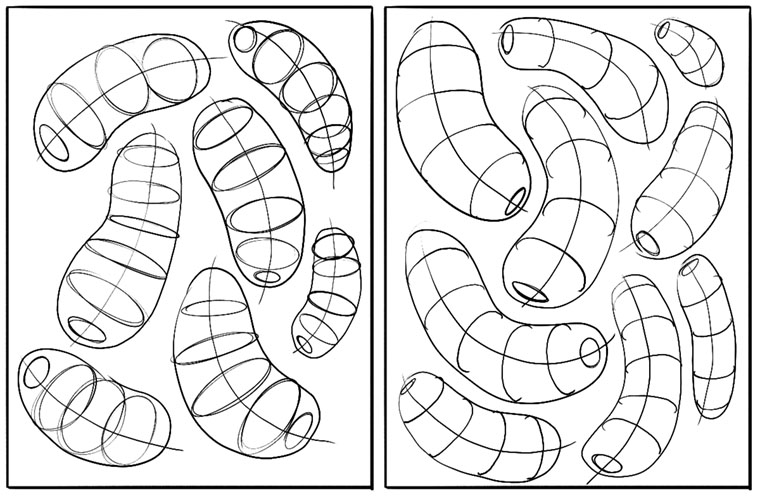