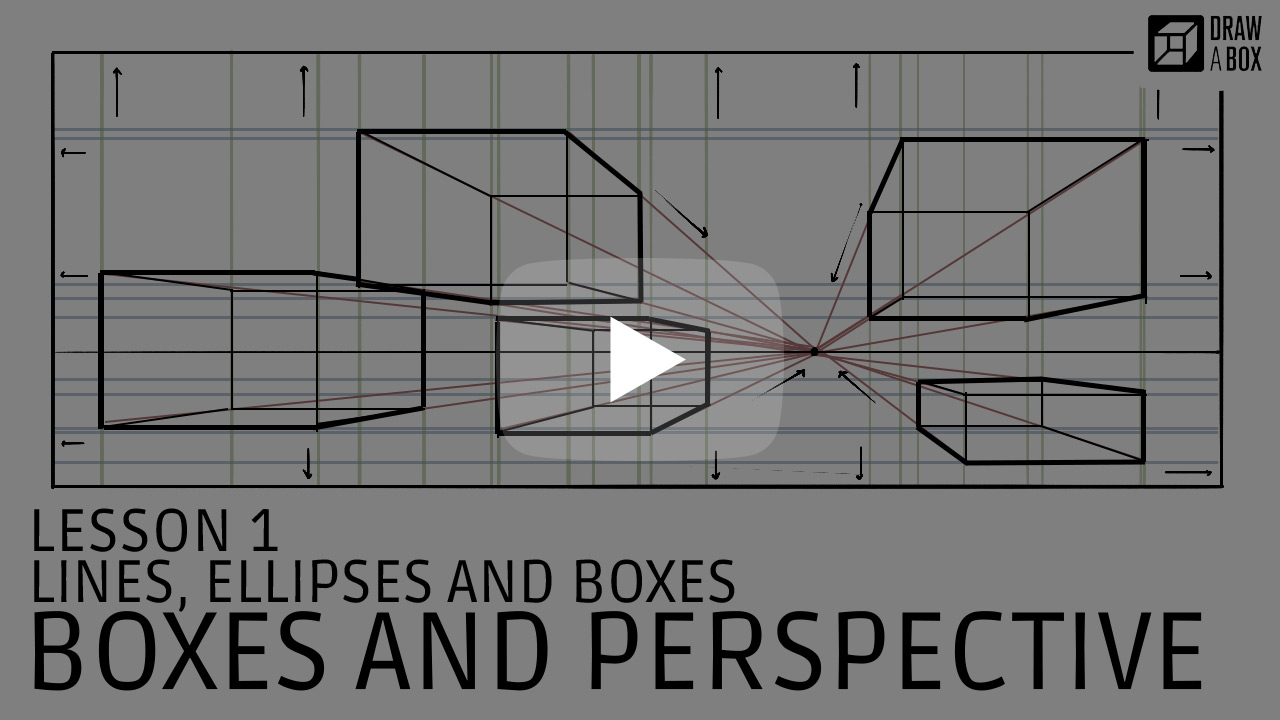 Before we get into this, I want to make one thing very clear: the lesson content on this page is a LOT to take in. The video may help you understand better, but it's not all going to sink in all at once. Watch the video, then read through the written material, then even if you're unsure of things, move onto the exercises. As you work at it and employ the concepts described, it will gradually start to make more sense over time.

Finally, having sloughed through lines and ellipses, we've reached the namesake of this website - boxes. I chose that as our name not because it is all I wish to teach you, but because it is representative of so much more.

A box consists of three sets of parallel lines. If you're familiar with three dimensional geometry, each set defines an axis - either x, y or z - and in doing so, it establishes the foundation of what we understand to be 3D space.

Any object can be simplified into the box that encompasses it. Any form can be represented and constructed within - you guessed it - a box. And any box can be subdivided, carved, and built upon to create any complex object.

But if we want to learn how to draw a box, first we need to learn something about perspective. 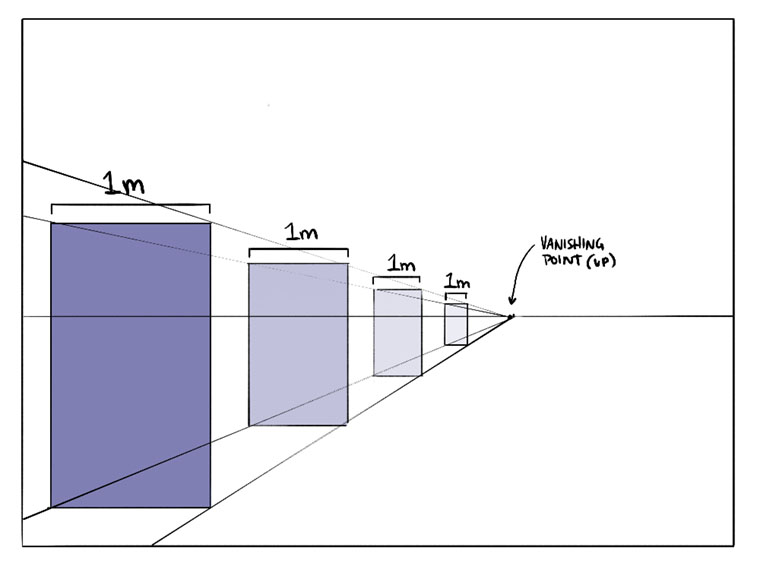 If you've heard anything about perspective in the past, you've probably heard about the concept of a 'vanishing point'. It is a representation of the most fundamental rule of perspective - as an object moves farther and farther away from you, it's going to appear smaller and smaller to you.

Eventually it'll get so small that it collapses to a single point, after which it effectively vanishes due to being so infinitesimally tiny. A vanishing point.

Instead of an object, we can also think of this as applying to a distance, represented by a single line. As this line moves further and further away, its length (the distance between the end points of the line) would shrink until it too collapsed to a vanishing point.

Finally, if you think of this distance as being the distance between any two parallel lines (which remains consistent in 3D space by nature of them being parallel), when drawn in 2D any lines that are parallel to one another will ultimately converge towards - you guessed it - a vanishing point.

This brings us to the rule that exists at the core of understanding perspective: any set of lines that are parallel to one another in 3D space will, as they grow farther and farther away from the viewer, ultimately converge to a single, shared point.

Again - if you know anything about perspective already, you'll probably have heard about 1, 2 and 3 (vanishing) point perspective systems. While we will deal with these each in small amounts at first, I want to make one thing clear:

These 1, 2 and 3 point perspective systems do not exist. It's a simplification of the concept intended to help beginners learn, but one that I find to be extremely limiting. When I was first learning perspective, it was something that confused me for years, and I've seen the same in many of my own students. 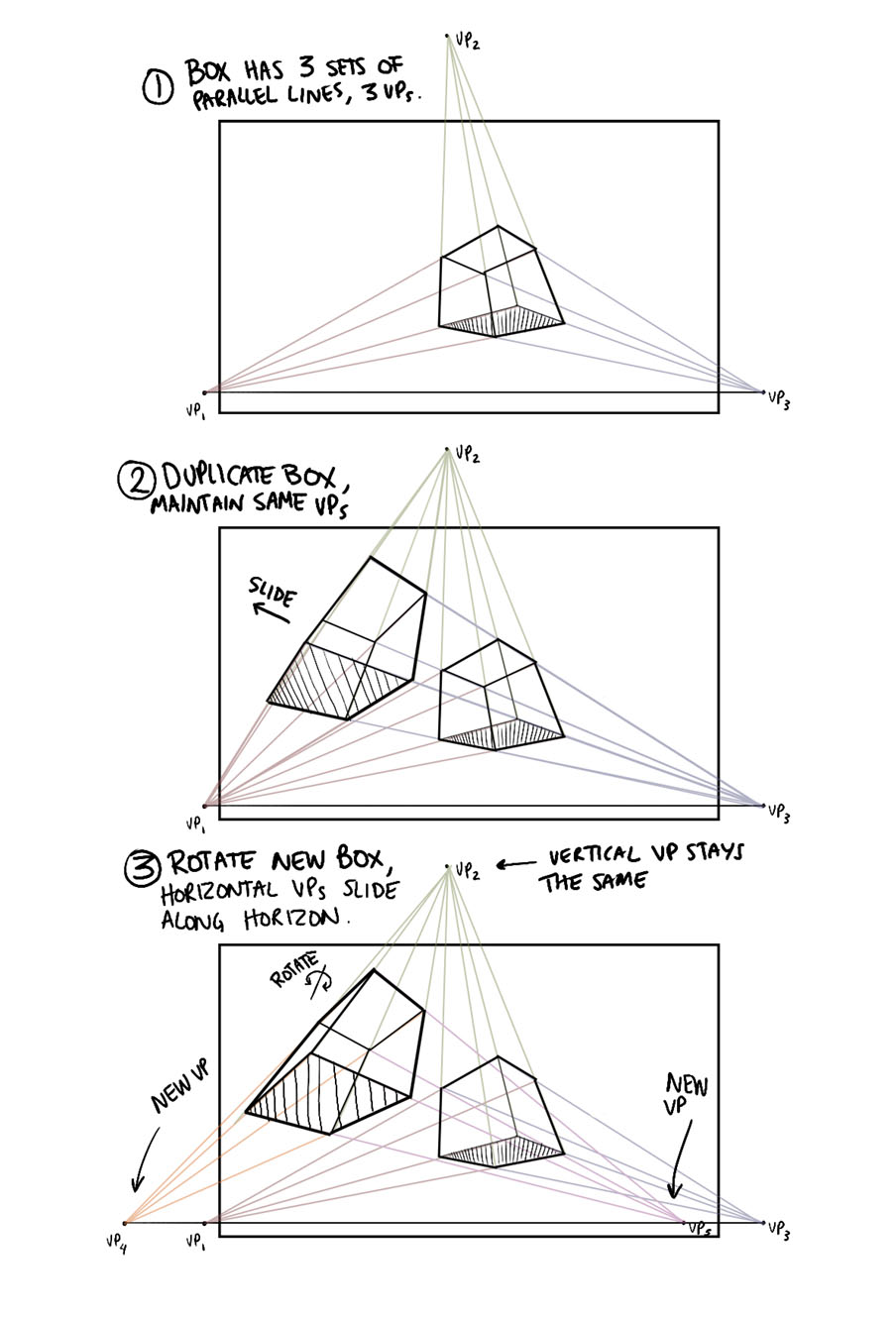 VPs in a scene

If however you take that second box and rotate it on one of its axes, two of its sets of lines will no longer be parallel to the corresponding ones in the other box, and you'll end up with 5 sets - therefore, 5 vanishing points.

If you think about drawing a scene in your kitchen in perspective, you're going to have all kinds of objects laying around - a fridge, a microwave, a cutting block, an oven, etc. And while you may be super neat and obsessive about keeping everything perfectly aligned to a grid, you're not perfect - some of those things are going to be off at some kind of an angle. In fact, if everything were perfectly aligned, it'd feel... off. Too sterile. Not to mention the fact that not everything is just a simple box.

There are so many different sets of parallel lines in a scene, and a vanishing point for all of them. 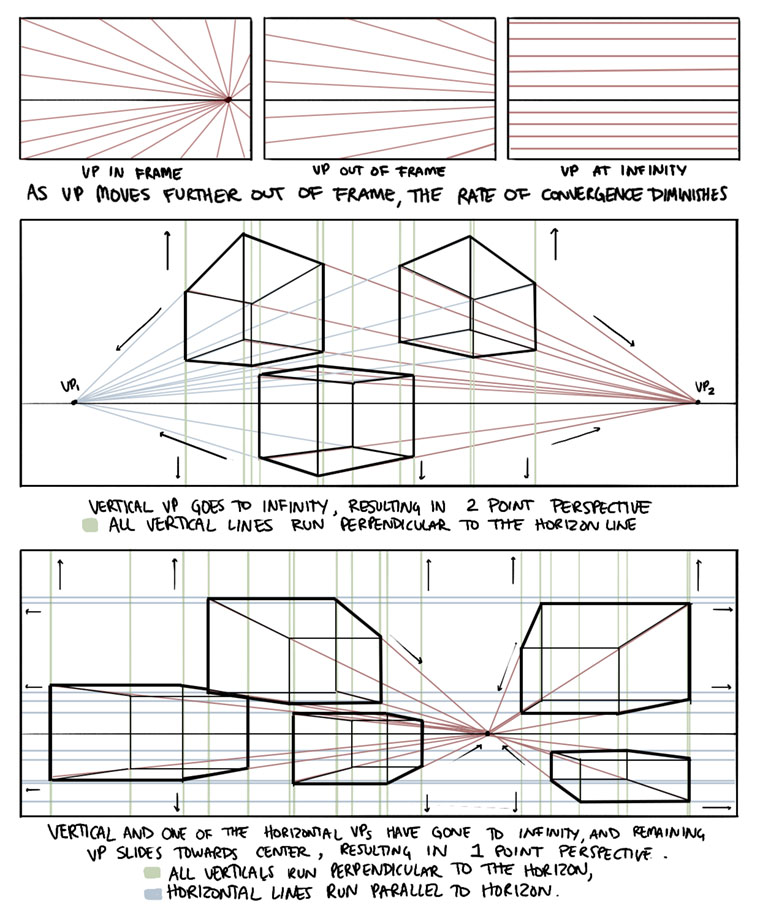 Now, 3 point perspective would be fine if all we had was a single perfect box in a scene, alone. But what about 1 and 2 point perspective? Those are also used to draw similar setups (a perfect cube alone in a scene), but we know that our box is made up of 3 sets of parallel lines - so how can we have fewer than 3 vanishing points?

There are ways, based on how we look at a given object, that we can eliminate some of its vanishing points. Or, perhaps a better way to put it is, those vanishing points are placed so far outside of our canvas or page that the convergence of all the parallel lines leading to it is negligible. It's effectively at infinity, and while in theory if we can look infinitely far away from where we're actually drawing, we'd be able to see those lines converge.

Two point perspective generally involves the vanishing point for your vertical lines, which usually sits very high up, generally off the page or canvas, being moved so high up that the convergences become pointless. Anywhere within the frame of your composition, any lines going up to that vanishing point will effectively run straight up and down, perpendicular to the horizon. We can achieve this effect only when we are not looking at the box from too high or too low of an angle.

Now, all of this is probably really confusing and is going to take a while to sink in. Don't worry about that, you'll start to grasp it gradually. What you can keep in mind for now, in terms of when to use 1, 2 or 3 vanishing points for a box are these much simpler rules of thumb:

While the focus on boxes does sometimes make it seem that Drawabox is primarily a perspective course, it's not. We merely get into the concepts of perspective that are necessary to explore 3D space in a more organic fashion, and right from the beginning once we lay down that basic foundation, we immediately start pulling away from critical tools (like vanishing points) so students learn how to draw without needing to refer to the vanishing points that might sit way off their page.

There are however a ton of useful perspective techniques and tools to be learned beyond what we cover here. If you're interested, you can check out this course from our sponsor, New Masters Academy:

That said, there's a lot of value in exploring a looser, more freeform approach to traditional perspective challenges:

Sign up to New Masters Academy with the coupon code DRAWABOX22 — you'll get a full 35% off your first billing cycle.

<<< Ellipses
Boxes: Additional Notes >>>
The recommendation below is an advertisement. Most of the links here are part of Amazon's affiliate program (unless otherwise stated), which helps support this website. It's also more than that - it's a hand-picked recommendation of something I've used myself. If you're interested, here is a full list.