Drawabox.com | Part One: The Basics | Lesson 0: Getting Started | Changing your Mindset | The 50% rule

This is where the message goes!
Going through both the videos and the text is important - it allows us to attack this complicated material from many angles, learning from it more effectively and efficiently. But reading isn't for everyone - try listening instead.
Drawabox has been working with the guys over at Audiblogs to make our lessons more accessible. With much more natural intonation and inflection than normal text-to-speech, it makes absorbing the material vastly easier. You can test it out on Lesson 0, and the Lesson 1 Lines section for free. You can also learn more about our collaboration with them here.

Drawabox is rigorous. It is composed of structured exercises, and it involves a lot of work. Some students gravitate towards this kind of course, seeing the structure as something that can hold their hand and tell them exactly what to do until one day, they're "ready" to draw the things they want.

I have seen countless students who shy away from drawing outside of the structure of a lesson plan, who feel that every moment spent drawing should be devoted to the improvement of their skills. They insist to themselves that they are not ready to draw those characters that interest them, to design those robots, or to paint those complicated scenes. They feel they have so much more to learn before they can even attempt it. Many of these students burn out on their own, but those who are able to push themselves all the way through find themselves at the end still feeling the same - like they are far from ready.

This mindset is common because we usually seek out a resource like this after attempting to draw something and having it come out badly. "I cannot draw," we tell ourselves. Some of us shrug and try something else instead. Others might face this failure however, and think, "I can find someone to teach me." While this latter mentality is certainly better, the overall focus on the result of our drawings is the biggest problem. As small children, this did not hold us back - we didn't focus on the end result, because we didn't know good from bad. We drew because it was fun. Somewhere along the line, we all forgot how to find it fun, especially when all we could show for it was that crappy drawing at the end.

Fortunately, we can learn to enjoy drawing again, but it's not an easy thing to do. It requires us to shift our focus from the result to the experience - to truly accept that when you say "I can't draw that," what you really mean is "I can't draw that well." There is absolutely nothing wrong with drawing badly. If you're afraid the thing you want to draw is out of your reach, draw it anyway. Even if - and ESPECIALLY if - you hate how it comes out.

The most important point I can make here is this: Doing something badly does not define who you are. It doesn't say anything about you as a person, and it is not the basis upon which you can reasonably be judged.

On the Drawabox Discord Chat, we actually have a channel devoted to all the times we've drawn something, and it's come out badly. #well-that-went-poorly is a channel devoted to celebrating the fact that we've drawn something, rather than staring paralyzed at a blank canvas. The channel itself deletes any messages so people can't give each other encouragement or feedback, because that's not the point. We know the drawing came out badly, but we're glad that we drew it anyway. 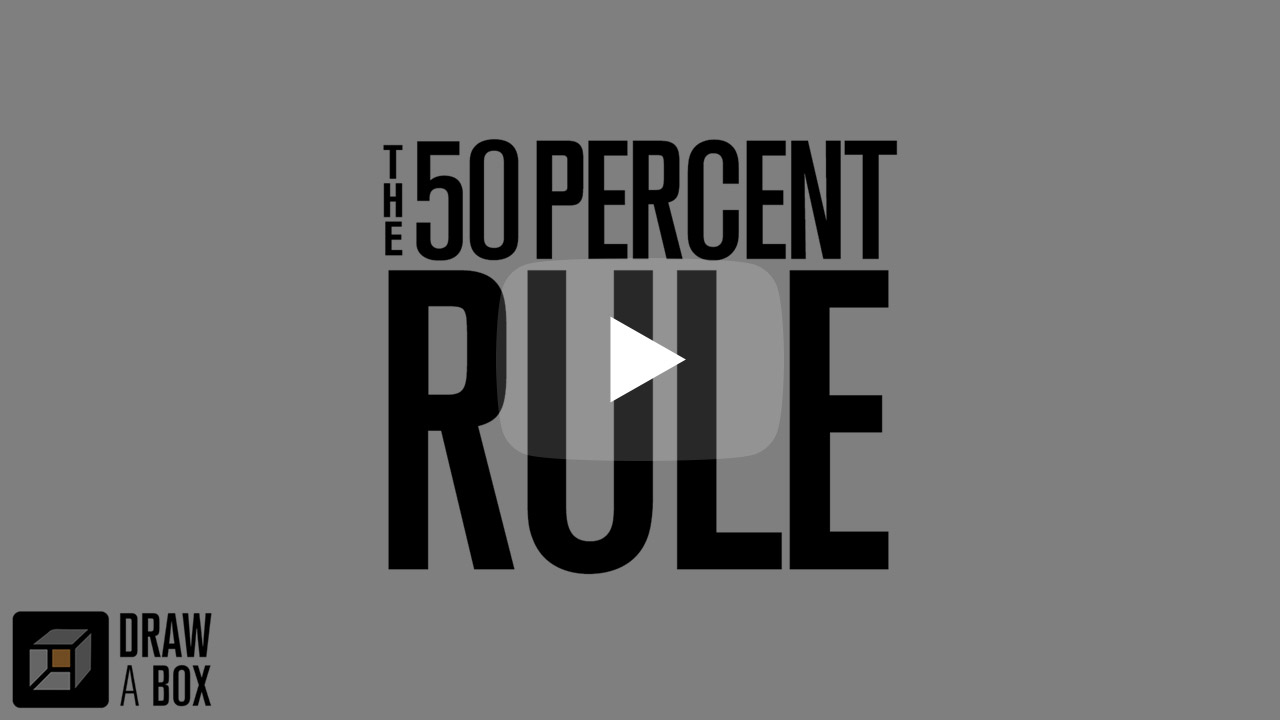 This brings us to an extremely important rule: at least half of the time you spend drawing must be devoted to drawing purely for its own sake. Not to learn, not to improve, not to develop your skills, not even to apply what you've already learned. There are no restrictions on medium, no specific techniques you must use, no subject matter you must focus on. Draw the things you'd draw if you were the most skilled artist in the world; draw the things your brain insists you're not ready to tackle just yet.

The other half of your time consists of whatever lessons, courses or tutorials you might be following. That can include Drawabox exercises, or anything else. Not only does segmenting your time into these halves help you to devote time to learning how to enjoy the act itself, but it also helps us to look at what we're doing with a greater sense of intent. Many students have a habit of doodling on the side of their Drawabox homework, as they work through the exercises - this kind of mixing of focus is something I don't want to see.

Instead, get your personal doodles and sketches out at their own designated time, and when following along with any course (not just Drawabox), make a point to follow its instructions to the letter. No distractions, no split focus.

Ultimately, we all work with different schedules, and most people do not have the freedom to devote hours of each day to drawing. Some might have only 30 minutes a day, or even less. In these cases, I'd recommend alternating the purpose of your sessions - spending the session one day on your exercises/lessons, and the next day's session on drawing for fun.

If you catch yourself thinking, "oh but I'm having fun just drawing lines and boxes," then you're missing the point.

Overcoming the fear of a blank page

Look, I get it. While the videos above may hit a little close to home in terms of bringing to light specific issues many of you will find in yourselves, that doesn't mean it's an easy thing to tackle. A lot of you will acknowledge the issue, but will still find it too daunting to actually do anything about it.

Some will still miss the point that the 50% rule is supposed to be incredibly difficult and frustrating. It's not supposed to be fun, not at first. It forces you to be vulnerable in ways you're not used to.

I've been through it too. This video explains how after a full decade of being afraid of the blank pages and canvases before me, I tackled the problem head on. It's a simple exercise, but again - it forces you to draw badly, and so it requires you to go up against your own ego.

At the end of the video, I also share a bit of the sketchbook from way back then. Keep in mind I'd been drawing for 10 years at this point, but this was before I'd ever learned the kinds of exercises I teach here on Drawabox.

Other resources on this important topic

I get it. This sort of thing is hard to understand - at its core, the 50% rule is about accepting that your mental health is more important than anything, and while society may convince you that you are only as valuable as what you can do, that is quite frankly a lie. Your ability to draw (or lack there of) has nothing to do with who you are as a person - as much as you may want it to - and drawing poorly does not reduce one's worth as a person. Just as in quite the same way, learning how to draw better will not make you a more worthy person.

We are, all of us, complicated, multifaceted beings, and worth is inherent in us. It is not for others to bestow that worthiness upon us, nor is it for us to question it of ourselves. But you will feel tempted to do so continuously throughout your life. It's probably one of the many reasons you're here, looking to learn how to improve your drawing skills.

This may be something you understand on a logical level, but believing it is a life-long task you will need to work at constantly. The 50% rule is, in all honesty, a big part of that.

But I digress. Since you shouldn't just hear one person ranting at you about these things, I'm going to gradually build up a list below of videos and articles from other people you should respect far more than me:

Now that we've gotten through some of the introductory stuff, on the next page we'll discuss what concepts Drawabox focuses on, and what kind of students these lessons have in mind.