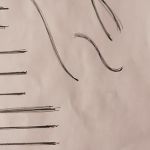 Did my absolute best but im willing to take harsh critique to improve myself.

Hi!, tomatoishealthy, and great username! I’ll be looking through your submission today~

Starting with your superimposed lines, these are looking good. They’re confident, properly lined up at the start, and of a consistent trajectory. It’d have been nice to see more than 4 arcing ones, but I suppose that’s alright. The ghosted lines/planes look solid as well, though I do have a few things to point out in regards to them. First, never correct an incorrect line. Put more effort in the prep phase, instead. Second, maintain the same speed throughout. I notice that there’s generally a lot more ink near the end of your lines, an indication that the student is slowing down, to make sure that they’re stopping at the correct place, but this is unnecessary. Mostly, because it gives control back to your brain, resulting in your line arcing, or becoming wobbly (very much the case here, too.) Instead, maintain the previous speed, and if the line overshoots the end point, or misses it, or anything else, it’s perfectly fine. What we’re after isn’t accuracy, it’s confidence, and it makes no sense to sacrifice the latter for the former.

The table of ellipses exercise looks solid. The ellipses are generally a little bumpy, and sometimes drawn through a few too many times, but this seems to be the exception, rather than the rule, indicating to me that you do in fact know these to be incorrect. Just in case, however, I’ll recommend spending a little longer on the ghosting stage, and having the rotations remain uninfluenced by the ellipse itself (i.e. don’t go for a 4th time if it’s starting to look bad.) The ellipses in planes exercise has these same problems, plus another- the mismatched rotations. This is not uncommon, as you now have more on your mind than just the smoothness/evenness of your ellipses, but that’s also why the recommended approach to fixing it is to spend a little longer on the ghosting stage. This same advice applies to the funnels exercise, too, where your ellipses start off alright, but become a little misaligned near the edges. For the most part, though, things are looking good.

The plotted perspective exercise looks clean- good job. The rough perspective exercise looks quite good, as well. Getting the obvious out of the way, your 2 sets of lines are properly parallel/perpendicular to the horizon. More importantly, the 1 set that should converge, does so quite successfully. To take it even further, I’ll give you 2 recommendations. First: spend longer planning it. Check and re-check each line, by ghosting it to its end point, and beyond, to the horizon, to see where it intersects with it. If it’s not perfect, don’t commit to it. Secondly, and this comes after you’ve deemed all your points to be ‘perfect’, look at the shape they form. If it’s in any way different from its near counterpart, then it’s incorrect. The reason for this, is that we’re working in 1 point perspective, and, as a result, the far plane of the box is of the exact same shape as its near plane, just smaller. Hence, if you notice that the back face is rectangle, when the front face is a square, then you know that there’s been a mistake somewhere. Solid attempt at the rotated boxes exercise. The rotation itself is a little slight, but the boxes, both near and far, are snug, and have been drawn through. Nice job seeing it through to the end. Finally, the organic perspective exercise looks solid, too. There’s a slight issue in regards to the foreshortening of you boxes, but that’s alright. Because of their subtle increase in size, and many overlaps, they convey the illusion fairly well, just the same.

Congrats on a strong showing, and good luck on the box challenge!

Thanks for the critique!

How should i revisit the exercises especially now with the 250 challenge coming up? Should i do them together with Lesson 1 like 50/50?

In a way! You pick 2-3 of them, and do them for 10-15 minutes, as per the instructions here. Mindless repetition isn’t the correct way to improve, compounding interest is~