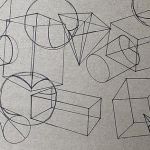 thank you for the critique.

It was very hard, but I've learned a lot.

Thank you for sharing your knowledge!

I think you've done a really spectacular job here. Overall you've demonstrated a considerable grasp of how forms relate to one another in 3D space - and using it to sell the illusion that those you've drawn are real and truly three dimensional, not just marks on a flat page. You've also shown the ability to look at an object or photograph and to break it down into its core elements, looking past the superficial and burrowing down into the core of what carries the most weight.

Starting with your form intersections, the grasp of how the intersection lines run along the surface of both forms simultaneously is very clear. Each one appears to be correct as far as I myself can tell (honestly, especially when you've got two separate curving surfaces intersecting, they're difficult even for me to figure out some of the time). Your cylinders in boxes are also each looking fantastic, and while you've identified some minor inconsistencies here and there with the line extensions, they are of the sort that aren't noticed by the naked eye. They'll continue to improve with practice, but are each of them still exceptionally well done.

Moving onto your vehicle constructions, I'm especially pleased with how bold and confident you were with the use of heavy shadow shapes. Lately I've seen a lot of students pushing harder past their comfort zones to commit to some shadow shapes, but the most common shortcoming is that they only focus on the biggest forms, picking and choosing which shadows they'd draw. In your drawings, you've applied your choices to every form consistently. You've also leveraged line weight to make each and every form clear and concise, bringing the complete object out of your construction without falling into the common traps of tracing or attempting to "replace" an underdrawing.

Looking at your '74 Ford F100, proportion definitely stands out here as something that - at least relative to the photographs I was able to pull up - is off, specifically with the bed of the truck. That said, however, your execution of the construction itself is still very solid, which leaves me in a position of wondering whether you were simply drawing a customized version of the truck where the bed was actually considerably shorter than it usually would be. This is, in my eyes, a sign that you really have established a strong grasp of form and construction - if the drawing is incorrect, but it convinces the viewer that you in fact correctly captured a true object that itself is off or strange, that is a victory.

Of course this doesn't work every time. For your Marchetti S.21, despite how marvelously the construction is laid out, the shorter wingspan does feel like it's hard to believe this thing would actually be able to fly (it seems that the actual thing's wings would be considerably longer). That said, as a toy or a failed proof of concept, the drawing itself is still extremely well built and convincing, and I'm extremely happy with the impression of thickness and solidity you've achieved in its wings.

Actually, I just realized the note you'd added yourself commenting on the short wings. Oh well!

Now, I think there's one area I wouldn't consider a shortcoming as much as an area you can continue to push yourself as you move forwards. Your drawings focus very much on a macro-resolution, and tend to set aside a lot of the smaller details that are present in these vehicles, the kinds of details that really embed a strong sense of scale. You've got a few little rivets on your locomotive, but I feel these kinds of smaller details could be present across more of your vehicles. Since your underlying construction is so strongly established, it seems the inevitable next step. This is especially true looking at the titanic, where there isn't too much to give a good sense of how massive the vessel was. Strong foreshortening was a good call, but without things like railings, it becomes much more difficult to relate one's own experiences to what they're looking at on the page.

So! All in all, really fantastic work. I think you've demonstrated an excellent grasp of the course material as a whole, and I am proud to consider this lesson complete, and with it, the entire Drawabox course. Congratulations.

At this stage, you are welcome to move onto the 100 treasure chest challenge if you like - it gets into more of the Lesson 6-style construction while bridging it over into more opportunities to design and push your creativity, but it is an entirely optional challenge.

Thank you! I'm very proud to hear that!