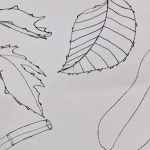 Tried to refrain from texture in the plants images

Starting with your arrows, these are done really well - you're focusing a great deal on a confident execution, which really helps to push the sense that they're moving through the world fluidly. This carries over nicely into your leaves, where you're not only establishing how they exist as static 3D objects, but also how they move through the space they occupy.

When adding edge detail however, it seems you may have missed the point here from the instructions about avoiding zigzagging back and forth across the previous edge detail. This issue falls into two categories - one where you end up redrawing the vast majority of your leaf, resulting in a very weak relationship between the previous phase of construction and this one, and another where you do build up your marks individually, but where you're not taking the care necessary to have them come off seamlessly from the existing edge and return to it, instead having them kind of cross back over the line more sloppily. This makes the construction appear more like a loose collection of lines, rather than a single cohesive piece.

Continuing onto your branches, you are generally handling this okay in terms of how the edges are laid out, although I have three main concerns to call out and one suggestion:

And finally, moving onto your constructions, you are generally handling this well (although the points I raised above are still present), but I do have a number of things to point out in order to keep you on the right track.

I am going to assign some revisions below. That said, yours is one of the last critiques I'm getting to before the start of our Summer Promptathon. As such, it would be best that you not start on your revisions until the beginning of July (at which point it would be a good idea to reread my feedback so it's fresh in your mind). In the mean time, feel free to participate in the event to burn off some of that 50% rule debt that you've no doubt accumulated, as most students seem to.

One of the pages is practice for rounded leaves.

Unfortunately there is a pretty significant issue that is present in the vast majority of your leaves here - specifically the more complex leaf structures which feature multiple "arms". You are skipping important constructional steps, in that you're not drawing each individual arm as a complete leaf shape as explained here in the lesson notes. You can also see this kind of thing in this demonstration from the informal demos page, which shows how we can build up to a maple-leaf type of leaf, building up complexity in successive stages, only ever adding that which can be supported by what's already present in the structure, and adding intermediary steps where they're needed.

Additionally, while your branches are definitely much improved over your last round, and you are extending each edge segment fully halfway to the next ellipse, I am noticing a tendency not to start your next segment at the previous ellipse, often starting it further along which minimizes the overlap. We can see an example of this here where the overlap is quite limited.

I'm going to ask for some further revisions below. I feel that if you can correct your approach with the more complex leaves, you should be good to go.

Will continue working on separate leaf structures to build up more complex ones. Starting to get the flow of doing the steps in order.

Some of the pages here show some scratch work but spent time mainly on more complex leaves, no details added. hope i didn't bend the guidelines too much, eg with the squash plant it's like one berry y round leaf that is very wavy and rounded, almost feels like multiple leaf arms but not quite