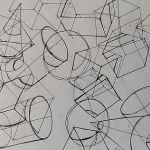 Hello Uncomfortable - Here is my lesson 7 homework submission, thanks!

Starting with your form intersections, overall you're definitely moving in the right direction here. You did however tackle a lot of particularly challenging intersections, and so there were some mistakes. This is totally normal - even now - but I've marked some of them out here. To be completely honest with you, half the time I have to scratch my head for a while with these as well. The form intersections will continue to be, at least as far as spatial exercises go, some of the hardest you'll ever encounter.

Continuing onto your vehicle constructions, honestly you've knocked this out of the park. It's clear that you went to considerable lengths to break down each of your objects, to subdivide as much as was needed to pin down the location of each element you added, and to observe and study your reference material as much as possible to understand which components ultimately made up the whole, and what characteristics were purposely designed in the given object's production.

It's actually a bit funny - the one comment you got on your imgur album, stated "Your brain works differently than mine". That's really the point of this course. The human brain isn't built to think in this manner. Our brains are really good at navigating 3D space, but when it comes to understanding it to a point where we can actually create an illusion of it on a flat piece of paper, we are woefully underdeveloped - or perhaps, developed in an entirely different direction. So for that reason, the exercises we work through here push us to use our brains differently, to develop new pathways and manners of thinking, to fundamentally rewire how we think about three dimensional space, and the marks we make on the two dimensional page. I can confidently say, looking at your results here, that your brain does indeed work differently now.

Now, I do have some minor criticisms to offer, but they mostly relate to the approach I want students to stick to in this course in order to continue to get the most out of these kinds of constructional exercises:

Anyway! All in all, your work is very well done, and I am proud of what you've achieved. I'll go ahead and mark this lesson, and with it the entire course, complete. Congratulations!