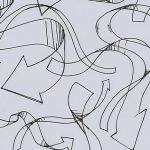 Phew, I'm finally finished with Lesson 2! It took a bit longer than I thought it would, but here I am. Can't wait for Lesson 3!

Thanks in advance for the feedback!

Arrows are generally diverse. I like it! Only thing to be said is that some arrows could be more exaggerated, having them grow/shrink and compress/decompress more through space. Don't forget what the exercise is about. Very solid job overall.

Organic forms are pretty good but there are things that need to be said here. In general, your sausages have ends of different sizes that are a bit pointy. Don't forget that the ends should be balls. Some forms are too long for comfort. The ellipses have their degrees all the same in some cases and you're not drawing through some of them. Be careful with those. Here's the link to the exercise in case you need to look over it again.

Textures show great observation and markmaking abilities overall. Good job! However, transitions from dense to sparse could use some work. It's too sudden in a number of cases as the textures get denser and darker. On the dissections pages, some sausages have their textures drawn explicitly in which "everything that has been drawn exists and there's nothing that exists that hasn't been drawn". Examples of this include: bubbles, pomegranate seeds, sponge Reef, Noble sea lemon.

Form intersections are pretty solid and the lines are nice and confident. They're also varied in general. There are 2 things to point out here. One is that some forms stretch a bit so remember that they should be equilateral. The other thing is that the rate of foreshortening could be more consistent. Be sure to make the forms more shallow to combat this problem.

Organic intersections feel super solid. Only thing to say is some forms are a bit long. So remember to avoid forms that are too long and snake-like. Also, some sausages look like they're going to fall. Remember that the forms are supposed to be stable so imagine them in their final resting point before drawing them.

Pretty solid job overall. I'm marking this as complete so you can proceed to lesson 3. Good luck!

This community member feels the lesson should be marked as complete, and 2 others agree. The student has earned their completion badge for this lesson and should feel confident in moving onto the next lesson.
ComicAd Network is an advertising platform built for comics and other creative projects to affordably get the word out about what they're making. We use them for our webcomic, and while they don't pay much, we wanted to put one of their ad slots here to help support other creatives.
The recommendation below is an advertisement. Most of the links here are part of Amazon's affiliate program (unless otherwise stated), which helps support this website. It's also more than that - it's a hand-picked recommendation of something I've used myself. If you're interested, here is a full list.