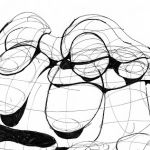 Hi, Mico. Congratulations on making it this far. For this critique, we'll address each of the homework exercises in turn.

You're showing reasonably good fundamentals here. Your lines are mostly very smooth and confident, so it's clear that you're applying the principles of markmaking. You also made good use of shading to create the illusion of depth. What hasn't gone so well is the compression on your arrows. They should get thinner in a consistent believable way as they move away from the viewer, like so: https://d15v304a6xpq4b.cloudfront.net/lesson_images/011d064f.jpg. I can see that you've made an effort to achieve this effect, but haven't quite pulled it off in places. My reccomendation here is to take extra time ghosting out the second line to make sure it runs alongside the first in the right way. Likewise, your use of lineweight would be smoother and more natural. Careful ghosting to make sure the thickening line matches the trajectory of the original line is vital, but placement matters too; like shading, we are using this tool to show depth here, and specifically to show which part of an arrow is closer when there is overlap, so bear that in mind next time.

Your linework here is good and your sausages are fairly consistent, which is what we like to see. You've also done a pretty good job keeping the ellipses and contour lines aligned with the minor axes. It's not perfect, but it's most of the way there and it shows clear thought about the orientation of these forms in 3D space, which is one of the. key skills you're supposed to be developing in this lesson. Your ellipses fit fairly well into the forms as well. My one issue is that there should be a consistent and obvious change in the angle of the ellipses within any given sausage, as shown here: https://imgur.com/rXLBxSg. I think you went for this effect in places, but we would expect to see a more obvious and consistent transition.

This is actually looking really good. Everything looks very deliberate; you avoided dotting, hatching, and scribbling. You also managed to show a clear and dramatic transition from dark to light in the rightmost panels, which is very challenging. It might have been nice to see more shadows on the surfaces of individual leaves in the third example, but overall this is very impressive work.

You did a great job wrapping these texturs around the organic forms, especially your use of gradients. You've also made some effort to break the silhouettes of each form, though there are places I think this could have been pushed a little further to great effect. Again, very good overall.

What's most important for this exercise is that you think about how these forms relate to one another in 3D space, and try to make these relationships clear. You've certainly done that, especially in your later examples. As you went along, you made better use of line weight to demonstrate relationships, though I think a little more time ghosting things out could help you to avoid the appearance of repeated lines (especially when they are curved; try to limit the number of lines you use to avoid things looking scratchy and haphazard). Still, this is a very good effort. I think your actual intersections are quite good, but here's a resource that I like to refer to when thinking about intersections: https://imgur.com/a/6Inx5Bz. If you're ever unsure, it's a helpful tool for this kind of construction.

I wish you had managed to make these organic forms as consistent in shape as your Organic Forms. The varied forms you drew are just a little harder to work with, and introduce more complexity than we want to see at this stage. (You've got to walk before you can run.) Your shadows are also not quite where we'd like them to be either. It's fairly inconsistent how much shadow forms cast and where, and while there's clear effort to use the shape of the shadow to show the form of the surface it's cast onto, you want to do it a bit more dramatically (like this: https://d15v304a6xpq4b.cloudfront.net/lesson_images/516f8d4f.jpg). You also don't seem to be drawing through all of your forms. There is one thing you did fairly well, though, and that's creating the impression that. the forms really are interacting in a physically believable way. If you can build on that, I think you'll be able to achieve some really impressive constuctions.

Hi Mech, thank you so much for the critique. Here is one more page of organic intersections as requested. I think I took your advice of making my shadows a little bit more dramatic way too far and now they look like blobs of tar oozing out of the gaps. Should I do it again? I think I can do better.

Hi, Mico. This is overall much improved over your first two attempts.

With regard to the shadows, to me they look better than your previous attempts, and really show the curvature of your forms. Of course, every mark should ideally be fully deliberate, so if they've gotten away from you that's something to work on.

It might be worth doing this exercise as a form of warmup or practice in the future to see if you can reign your shadows in, but I think you're ready to move on to the next lesson.

Go ahead and move on to Lesson 3.

This community member feels the lesson should be marked as complete, and 2 others agree. The student has earned their completion badge for this lesson and should feel confident in moving onto the next lesson.
The recommendation below is an advertisement. Most of the links here are part of Amazon's affiliate program (unless otherwise stated), which helps support this website. It's also more than that - it's a hand-picked recommendation of something I've used myself. If you're interested, here is a full list.