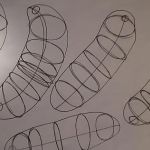 Looking forward to critique as always.

And as always I've encountered a few problems that I would like to ask.

So the first question is, what is a good advice to get myself to draw around my forms instead of my mind slowly forgetting and start placing forms as if they are stickers on a 2d plane?

Second question is perspective related, a or b in the image I provided down bellow. Since moving a box to the left technically mak eit face us.

To answer your perspective question first, we're going to assume that the little character is looking straight ahead, and that they aren't at any angles, just oriented straight ahead as well. This means that their "angle of sight" is an arrow going straight up and down on the page in your top view diagram.

In that case, the answer is A. The horizontals remain completely parallel on the page with a vanishing point at infinity because in the top-view plan, they're perpendicular to the viewer's angle of sight. That's the only circumstance in which their vanishing point goes to infinity.

Onto the homework! So starting with your organic forms with contour lines, the contour lines themselves are looking pretty good - the ellipses are a bit stiff/uneven at times, so you need to be drawing them more confidently and using the ghosting method, but other than that they're snug within the silhouette of the form and you're demonstrating an understanding of how their degree ought to shift wider/narrower.

The main issue here is that you're not entirely following the characteristics of simple sausages. You're close, in that you seem to be thinking about generally keeping them simple, but remember that we want to stick to two circular ends (you have some that are a little unevenly shaped or more stretched out), equal in size, connected by a tube of consistent width. Again - you're not far off from these characteristics, but do need to be actively thinking about them as you draw.

Continuing onto your insect constructions, I think this is a good opportunity to answer your first question - how do you get yourself to understand the forms you're drawing as though they're 3D, instead of drawing them like stickers on a flat surface? Well, the key to that - and it's not a quick fix but rather something to work at - is to force yourself to interact with your drawing in a much more limited set of ways.

So for example, we can see that in this hercules beetle, both in its thorax and head, where you drew them initially as larger ellipses, then drew what you actually wanted to craft inside of their bounds, cutting across those silhouettes freely.

You can see this in practice in this beetle horn demo, as well as in this ant head demo. This is all part of accepting that everything we draw is 3D, and therefore needs to be treated as such in order for the viewer to believe in that lie.

In this regard, this beetle was much more successful although you do appear to cut into the head a little, and the little spikes you've got protruding from the front arms are actually extensions of the silhouette rather than their own independent, complete forms. I actually think in general, you are moving more and more in this direction (this lobster is built up nicely too, though most of the contour lines on its claws aren't actually contributing anything of use), though it does need to be a conscious thing.

Moving on from that, I noticed that you do appear to have made an effort to use the sausage method when constructing your legs, although there is definitely room for improvement here. For example, make sure you are once again sticking to those characteristics of simple sausages - sometimes you slip into drawing ellipses rather than sausages.

I am pleased to see that you're building on top of those structures, but there are even better ways to approach this that adhere to the principles of building up "additively" which we described above. As shown here and here, you can wrap new forms around the sausages, using them as a base structure/armature and then introducing new structures to add bulk where it's needed. Note in particular how I'm ensuring that the new form's silhouette makes a lot of contact with the sausage structure underneath - it's through that silhouette that I'm defining the relationship between those forms. You can see this at play in this ant leg demo and in this dog leg demo (since this technique will continue to be used throughout lesson 5 as well).

As a whole I think you're moving in the right direction. So, I'm going to mark this lesson as complete, and leave you to continue to developing on the points I've raised in the next lesson. I do however want you to give the following informal demos a look, as they should help you further understand how to approach this kind of construction: