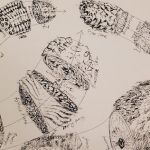 It took me 10 months... I'm intimidated by these challenges and sometimes have other priorities but I'm slowly making my way through.. I'll try to get the next lessons done quickly! Texture analysis lesson was very helpful. Form interesections were distressing and with organic intersections I felt so lost so many times... I'm just glad I'm over and done with Lesson 2!

Hey there, welcome back to the course I'll be handling your lesson 2 critique.

You're making good progress towards understanding the concepts introduced in this lesson, below I'll be listing some things that will hopefully help you in your future attempts at these exercises.

I do apologize if this critique came off as a bit harsh, I know that I pointed out quite a few things that need to be worked on but know that I do so because I want you to see where you can work to improve. As I mentioned at the start of this critique a lot of these issues aren't actually with concepts that were taught in this lesson but issues that would have been worked on in earlier course content. Every lesson in this course builds upon each other and this is a pretty good example of why we stress to keep practicing previous exercises as warm ups, if your understanding of a previous lesson is weak then it serves as a weak foundation when you go to build more concepts on top of it.

I won't be moving you on just yet, we can address some issues here and and also get rid of some of that rust from being away for 10 months to get you back up to speed. We definitely encourage people to take their time, and of course life can get in the way of things at times (especially within this past year, it's totally understandable), but 10 months is quite a bit of time so it's normal to not be as comfortable with these concepts as you once were.

I'd encourage you to read through lesson 1 again just to re-familiarize yourself with some of the previous concepts, your line work is probably what held your submission back the most.

With that being said I'd like you to re-read and re-complete:

Once you've completed these pages reply to this critique, I'll go over them and address any issues that need to be worked on and move you on to lesson 3 once you've shown you're ready.

I know you can do this, and look forward to seeing your work. Don't stress too much, like riding a bike you'll find that you pick up everything again much quicker this time.

When finished, reply to this critique with your revisions.
The recommendation below is an advertisement. Most of the links here are part of Amazon's affiliate program (unless otherwise stated), which helps support this website. It's also more than that - it's a hand-picked recommendation of something I've used myself. If you're interested, here is a full list.