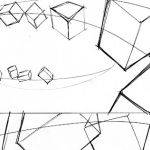 guys, I blew my allowance on a pack of Felt tip pens but I don't think they are the right size.

Heya Mico my name is phobic and i will be your critique man thingy for today.

So before i get started i will explain how i will go through this critique. i will break down the lesson into 3 sections LINE, ELIPSES, AND BOXES, where i will go over the good, the not so good and my opinion on what your next steps should be. so without further adieu lets get into things.

Ghosted Lines: So for some of the lines it is a bit tricky to see them due to small parts on the second page being cropped out however that aside there are some areas you did pretty well namely you attempted a wide variety of lines and lengths which is pretty good practice and you also attempted the optional curved lines which can be quite tricky to start off with so good attempt. from what i could see the lines appeared to be drawn confidently however there appeared to be a little bit of wobblng which is something i advise you be careful of however so far things appear to look good.

Ghosted Lines: So for the ghosted lines they appear to look pretty good as the lines appear to be pretty accurate and it seems like you have made an attempt to ghost the lines. some areas i would advise you to watch out for is in some lines the lines start to arc a little which causes them to curve. (check out lesson 1 for more information on this) and also there appears to be a little bit of wobbling on some of the longer lines which is something i recommend practicing to mitigate in your warm ups. however other than that all seems good.

Ghosted Planes: for this exercise you appear to have re-used the planes for the ghosted elipses in planes exercise. this is fine i will just look at the planes now and will mention the elipses part later on. So for the planes themselves they appear to look pretty good with the same praise and critique of the ghosted lines exercise applying here. some additional critique i will offer however is in some of your lines you re-drew the lines when you missed the point in a couple of instances. it is heavily advised you fight the urge to do this as the goal is to draw lines confidently and not accurately with accuracy coming later on over time.

Table of Elipses: so at a first glance "WOW that's alot of elipses" so looking more closely at your submission you appear to have used a variety of elipses with each appearing to have been drawn through twice which is pretty good. one bit of criticism i will offer is in some elipses they tend to overlap one another or go over the boundry's of the lines a little bit which is fine for now and i highly recommend practicing this a bit more in your warm ups moving forward.

Ghosted Elipses in Planes: So for the elipses here similar praise and criticism offered for the Table of Elipses exercise applies. One additional note i would like to add in addition to the previous points however is when drawing the elipses in planes it can be easier to rotate your page and find a different angle of approach for drawing your elipses in order to ensure the elipses neatly sit within the center of the plane with the elipse neatly touching all 4 sides of the plane.

Funnels: For this exercise you have done a really good job in mitigating the overlap between your elipses which was present in the table of elipses exercise and i advise you to continue with this. along side the funnels you also attempted the additional corner funnels which look pretty good and the elipses seem to line up neatly on the minor axis. one area of improvement i would suggest is for the main funnels some of your elipses were a little bit off on the minor axis so you may wish to practice this in future however other than that good work.

Plotted Perspective: The boxes appear to line up to both vanishing points with only a little bit of distortion but other than that looks fine i have no complaints here.

Rough Perspective: so first of all for the boxes you have done a pretty good job keeping your boxes to 1point perspective and you have drawn through all your boxes. however there are some areas of improvement namely some similar criticism from the lines section that being wobbly lines and re-drawing lines which are things to avoid. This is an area i highly recommend practicing which you will be able to in warm ups and in the 250 boxes.

Rotated Boxes: first of all these look pretty neat with only a couple of instances of re-drawing over lines but other than that pretty good. some extra areas to work on is the gaps between the boxes as they are a little bit inconsistent and some of your boxes are a bit inconsistent size wise. however this challenge is intended to be quite tricky (i would know your submission is way better than mine haha) but yeah good job lets move onto the last part of the BOXES section.

Organic Perspective: from what i could see this is a good start on your journey into boxes as the boxes are drawn neatly with line weight applied. only criticisms i will offer here is that your re-drew some of your lines here still and that the boxes you drew did not really change too much in terms of rotation in some of your boxes. however other than this i see no issues so let's move onto the closing statement:

Closing Statement: Overall this is a very strong submission with some notable issues namely Re-drawing lines and accuracy. both things that can be solved over time with practice. with that in mind i have no issues marking this lesson as complete. next up 250 boxes Good Luck.

This community member feels the lesson should be marked as complete, and 4 others agree. The student has earned their completion badge for this lesson and should feel confident in moving onto the next lesson.

Yoo. Thx for this. I didn't realize some of my ghosting lines where curved until you pointed them out and I will try my best to break out of the habit of re-drawing my lines. Thank you so much!