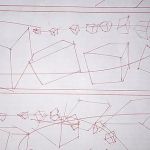 Really would appreciate anyone reviewing my lesson 1 homework. Thanks in advance!

Pretty confident and smooth overall, good job! You do have fraying on both ends at times, so careful with it, when starting a line, you should carefully place your pen on the start of each line, so only a maximum of 1 end can fray. Plan each stroke you make carefully. Some of your lines overshoot quite a bit, which is completely normal, but be sure you're ghosting enough on each line, take your time.

Ellipses are p good as well, though they get a tiny bit of wobble at times. Don't forget to prioritize confidence over accuracy on them, just like with lines. On funnels, you've mostly done it, but don't forget that the minor axis has to cut the ellipses in 2 identical halves, if you have to ignore the curves to make them symetricall, ignore them.

On rough perspective, you seem to have trouble keeping height lines perpendicular to the horizon line, and width lines parallel to it. I know it's hard, but be sure you keep it in mind while attempting the exercise.

Rotated boxes is hard, and you did a p good attempt, but there are a few instances where you don't rotate the boxes, givethis.) a look to make sure you're aware of it.

There are also a few instances where I think you aren't plotting your lines, before starting any line, you should first draw the starting and ending dot of it, don't forget about it, as it's super important for applying the ghosting method.

In general, you seem to be rushing in the last exercise too, don't forget to take your time, if you need a break, take it, you can complete exercises in more than one sitting too if you feel you're getting impatient.

First of all, congratulations on finishing lesson 1! Your next step is the box challenge.

As I marked this as complete, you are now qualified to critique lesson 1 submissions.

-Doing critiques is a way of learning and solidifying concepts. I can atest to that after having done hundreds of critiques. There are a lot of concepts that I did not understand, and thanks to critiquing I started understanding them. Which made me learn a lot more through the course.

-Another thing is that as the number of current submissions is super high, if you critique some critiques, those would be less critiques I'd have to critique before reaching your next submissions, so you'd get your critiques faster.

It's totally optional of course, I won't force anyone to give critiques. But me and the other people who are critiquing would be super grateful if you gave it a shot.

Good luck on the box challenge, and keep up the good work!

There are a few people that feel hesitant to critique because they feel they aren't ready to it so hopefully it'll help you in case you are one of those people.

Thanks for the critique! I didn't expect anyone to see my work so promptly. Firstly I wasn't careful enough of somethings while drawing but now I'll try to make sure I keep your things in mind while drawing. Again thanks for taking your time to review my work!

edited at 3:01 AM, Jun 20th 2020
The recommendation below is an advertisement. Most of the links here are part of Amazon's affiliate program (unless otherwise stated), which helps support this website. It's also more than that - it's a hand-picked recommendation of something I've used myself. If you're interested, here is a full list.