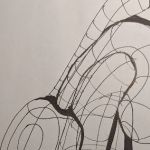 There are some extra arrows.

The form intersections were quite difficult, and at first I didn't quite get how not stretch forms in one dimension.