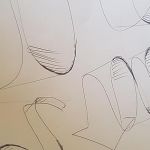 this is my second attempt doing lesson 2. it's taken some of time and effort to complete.

You are overall better, but still have a lot of things to improve.

Arrows : They are better and flow through space, but there is two main problems.

One : they don't compress enough as they get farther and farther away. It's not only the size of the arrow that should compress (you did that well), but also the space between the bands, until they literally overlap. Take a look at this image : https://d15v304a6xpq4b.cloudfront.net/lesson_images/f875589f.jpg.

Two : The hatching and the weigh lines could really improve. I see you didn't do the hatching for the boxes on the 250 boxes challenge and that's sad because it would have helped you tremendously. For now, when you do hatching lines, ghost before doing them. It is important that they are at least strait.

Organic forms : Those with ellipses are better, since the degree varies more. But there is too many ellipses. I feel you are doing them a bit automatically, without thinking how they really cut into your form, as if you're not believing you're drawing in 3d. Also, they aren't drawn though. That's something you should have learned from lesson 1, as that will help you train to make them more precisely. Your contour line are better too since they wrap around the form. What you could really improve on those organic forms (they are sooooo important for the next lessons), is changing the degree of the ellipses even more, and do only contour lines/ellipses after thinking them though and though them necessary. Take a look at this image : https://imgur.com/vg0vy0v.

Dissection : First, why aren't your previous organic forms drawn like this? I feel the ellipses are way better and not rushed. The degree of the ellipses could be better though. For the textures, you did improve a lot too. One thing I see is that the patterns are really repetitive and mechanic. Most objects in life have more variation too them. So I feel like overall, you didn't do enough observation.

Form intersection : They have improved a lot. Some intersection could improve but the overall picture isn't bad, and I feel that I don't need to add much on them. The thing that could really improve is your line quality. The hatchings aren't strait, the weight lines aren't precise. More ghosting! Also superimposed lines as warm ups.

Organic intersections : There is a lot of improvement too. The main problem is that not all of them are drawn through (we should see the lines of those hidden partly at the back).

Now make a list of the comments I made here. Next Some of them are repetition of those I did in the first critique, and it's all right. Sometimes it takes repetition to really sink in. Some of the exercises are coming back in the next lessons. When you do them, bring back up that list and make sure you try your best to respect them (sometimes, you need to exaggerate the instruction, only to do it as you should).

I feel my first critique was cold and harsh and you made it though, and did the homework again with a lot of improvement. Continue like that and nothing will stop you. I will make this lesson as complete.

This community member feels the lesson should be marked as complete, and 4 others agree. The student has earned their completion badge for this lesson and should feel confident in moving onto the next lesson.

With the organic arrows exercise, regarding the areas where the arrow curves, you use a straight line for most of these.

Curve the line to match with the arrow. I can see you've done this with at least one of them (the last one you drew?) so I'm sure you've noticed how much better it looks.

The textures are great! I understand the pain of how time consuming the texture exercises are...

The only thing I can say about them is to practice the smoothness of the transition from dark to light.

But form is more important at this stage anyways so don't sweat it.

Your intersections are perfect!

I'd invest in a brush pen or sharpie to help fill in the shadows : )

Lesson 3 is the next step.